Although on the whole I try to be economical and thrifty (often fancy words for "cheap"), there are a few luxuries I purchase for myself that literally make no logical sense.  Books are one of these, of course - not that books are illogical of course, only the rather sheer quantity I own and continue to procure.

Another is shaving cream.

Many many years ago - good heavens, looking back I see it was 11! - I wrote a post on A Good Shave.  I had converted over to using soap in a bowl and a bristle brush years before that, mostly originally out of an obstinate need to be different and vaguely British (while everyone uses the same cream, for some reason I associate it with 19th Century Britain).  And then at some point, I took a risk (most likely based on some article I read) and bought shaving cream. 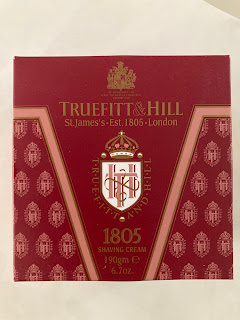 I purchase my shaving cream from Truefitt and Hill, a British company specializing in Men's grooming (So, the British motif is still working for me).  It is certainly not the least expensive such thing on the market, but it has become one of my personal justifiable luxuries.
On one hand of course, it makes no sense.  I could get the same thing much more cheaply in vast quantities at my local grocery store for what a single bowl costs (although to be fair, a bowl lasts a long time).   And yet, there is something about opening up the lid, working the brush in a little, and then putting the full-bodied thick soap onto your face, letting it sit there for a bit, and then shaving. It makes it more of a production, something to look forward to, rather than just something I have to get out of they way. 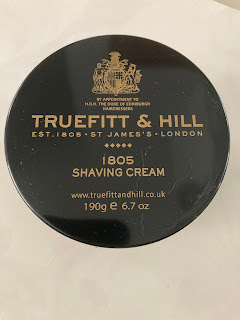 The original scent I purchase was Trafalgar, which was delightful.  My current scent above is 1805, which I think I like a trifle better. Also - because I got a gift card for Father's Day - I purchased a smaller tube of the West Indian Limes shaving soap.  This in particular has an amazing scent. 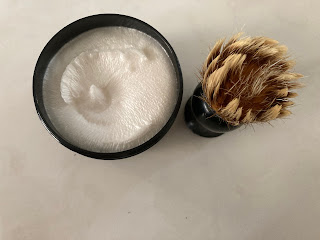 It can be said - and righteously so - that in an age of increasing expenses and instability, the concept of spending a rather foolish amount of money on something that can be procured more cheaply is silly at best and foolish at worst.

We can always purchase things that are effectively the cheapest and the lowest common denominator, and if practiced over time, we will save money.  What we will not save and sometimes sacrifice is the enjoyment of very simple pleasures.  Something like whipping up a shave in the morning that is from a bowl and brush instead of a can is indeed a very simple pleasure for a practice millions do anyway; the difference is that something simple like shaving cream turns a daily task into something of a pleasure.

Arguably this sort of thing does nothing for my shave.  It does, however, do a great deal my larger life.  And if it is somehow improving that, it not just a justified expense - it is a bargain.
Posted by Toirdhealbheach Beucail at 2:00 AM