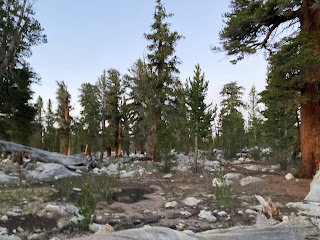 We are up again before dawn on this, the last day of the hike, as we have a long day ahead of us:  not just to the trailhead, but then getting back to civilization.  We again leave in two groups, 0430 and 0530, and again are all pretty much awake at the earlier time.  Breakfast this morning is whatever is (literally) left:  oatmeal, granola, remaining snacks that we have not yet eaten.  Again, we prepare in the dark and start out just as first light is breaking. 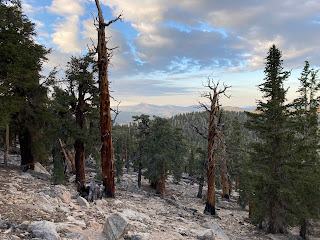 Our hike in the morning was a long upward traverse through the rocks, sand, and sequoia stands that we had seen the previous day.  As we continued, it became clear that we were walking along the side of a series of mountains as we went up, never really crossing over.
One of the benefits of walking along the side, of course, is vistas continually open up to you. 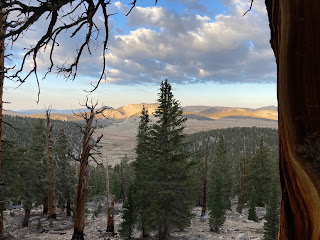 I would say the pace was measured, except I suspect that for all of us there was underlying unspoken urgency of "getting back":  not to the world per se, but to conveniences like actual toilets and hot showers and the sorts of things one takes for granted in civilization until they are not there. 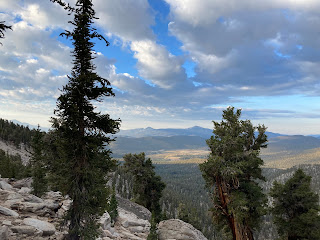 Passing up and up and up, we finally reached a high point before descending to Chicken Lake, which was the next water location.  As it turns out, the water situation was fine.  We pressed on and after one more short ascent, we reached Cottonwood Pass and could see the goal of Horseshoe Meadows below us. 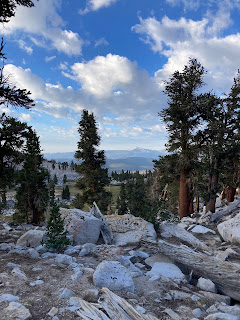 The path down from Cottonwood Pass turned out to be more of a descent than I had anticipated, and as usual I fell behind (again). The Outdoorsman stuck with me on this last descent, which was likely two hours.  The change in scenery from no trees to sequoias to pines to water and meadows was a very noticeable change due to the steepness of the descent and the shortness of time. 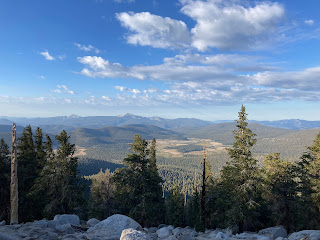 We began to run into hikers coming up the trail as we were going down:  most stop for a short social interaction ("Where are you coming from?  Where are you headed?  Good luck!") before continuing on.  I noticed how many of them smelled fresh and clean.  We must be getting close. 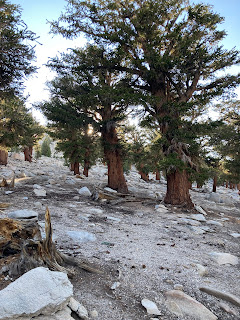 We hit the valley floor and marched on through the sand and dirt.  Although the flat, this seemed to take the longest time of all, probably mostly in my mind due to wanting to be at the end.  Suddenly, the signs for the National Forest stared appearing.  We had made it.
(Chicken Lake) 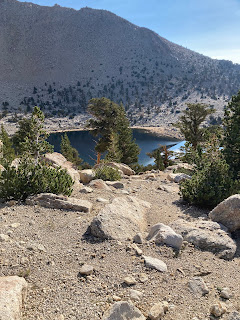 After a celebratory beer/soda and the traditional eating of salty and sweet junk foods (crullers never tasted so good), we packed up everything into the van and truck and started our journey of about an hour to the base of the main valley for a shower and lunch before headed out.  We pulled out of the parking lot around 11 AM - it had taken us 5 hours to complete the remaining hike.
(Cottonwood Pass) 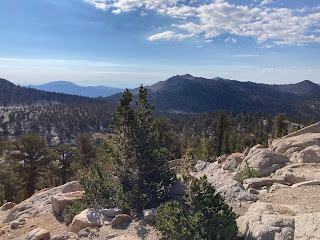 The drive down was filled with the chatter of how things had gone and how grateful we were for the experience.   As we continued to descend, the land around us became drier and drier, a reminder that while we were somewhere else, everything else remained the same.  At some point cellular function returned and the van went silent as everyone started to catch up on the last 8 days. 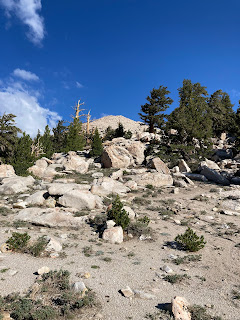 Reaching the nearby town, we piled out and waited at a hostel for our opportunity for a shower (Apparently a "Leave behind" bag is a thing which among other things is supposed to contain a change of clothes for such events as this; I had less dirty clothes and a new shirt with "I Climbed Mt. Whitney" on it that would suffice).  In dribs and drabs we passed in for quick showers.  When my turn came, the sweat and dirt caked off me.  A shower has never felt so good.
As people emerged from the showers with wet hair and relatively clean bodies, they came dressed in the clothes they had prepositioned.  All of a sudden, we were not all one "hiking" unit; individual preferences and appearances came back to the fore and individuality began to emerge.  We had already started to dissolve into our constituent parts. 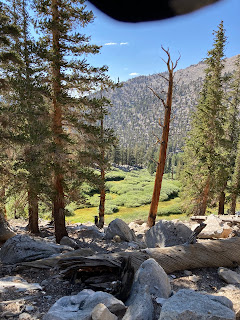 Post shower, we walked across the street to a pizza shop where large quantities of pizza, salad, beer, and soda were consumed.  I ate far more pizza than I have for many years. The conversation was loud but jovial and we celebrated our accomplishment and our return.  Trail names were awarded or confirmed - the name "Survivor" was retained by me because of always being grateful that I did not die on that day.
All too soon the pizza was gone, the glasses were empty, and it was time to go back.
(Looking back up to Cottonwood Pass) 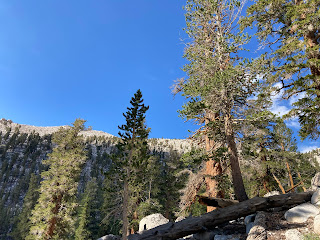 The ride back was a long, dreary four hour flat drive through a valley floor that while I had not been to for many years, I knew all too well for all of that.  A playlist of mostly '80's music filled the van as we moved through the dry-brown landscape of cities and towns I knew the name of but had not seen ever or for years.  People napped or caught up on social media or exchanged pictures.
At one point we stopped for fuel.  Everyone piled out of the van for the first chance at honest junk food in 8 days.  An attached McDonald's supplied me with the vanilla shake I had been dreaming of for 8 days. 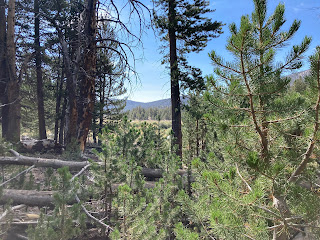 Arriving at our starting point, we pulled out backpacks and packed/unpacked as necessary.  We all stood there in a large circle in that awkward moment that groups such as these too often face, people wanting to go but not really sure how to leave.  Finally The Outdoorsman and I broke the spell, pleading length of drive.  Another round of goodbyes and well wishes and we were off. 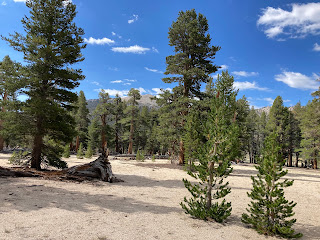 The drive home - another three hours or so - was mostly filled with retrospective considerations, the sort that the human species has done since time immemorial on equipment and experience ("My spear was not sharp, Og.  I wonder what I could do about that?").  We stopped for second Vanilla milkshake and burger and fries, which actually is our usual post-hike celebration meal.  We plotted and planned what the next hike would be and realized we should probably go hiking one more time in September, while the weather was still good. 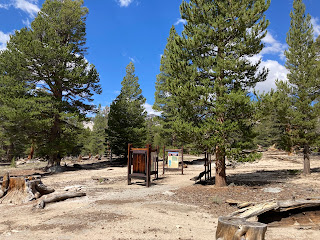 By the time I pulled into the driveway post dropping off the Outdoorsman, stopping to buy some breakfast for the following day, and then the last long drive home, it was almost 2030.  Even then I was not done:  compulsive as I am, I unpacked, put my clothes in the washer, and took a second shower.
The pine trees and moon that night asked me where I had been as I looked out the window.
To see the world, I replied.  To see the world.