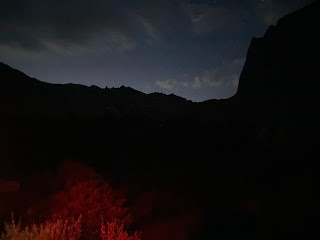 We start off in two groups, the first leaving at 0330 and the second leaving at 0430 with hopes of coming together more or less on time at the summit.  I am in the latter group - although to be fair, we are so close we likely all wake up at 0230.  We only carry our packs with required clothing, snacks, and water - everything else is left onsite.
The hike up Mt. Whitney is in three stages.  The first is a 2-2.5 mile hike up to the Guitar Lake, effectively the last water before one climbs to the summit.  The second is from Guitar Lake to Pack's Rest, where the ascent meets the John Muir Trail - again, a 2-2.5 mile hike.  The final leg is a 2 mile hike from Pack's Rest to the Summit.

The first hour or so is spent in the dark as we hike along past water that I can see but not hear and trees that loom as shadows in the darkness.  There are rises and falls but one is almost unconsciously of them as the focus is ever on the placement of the feet in the dark.  The stars shine brightly and looking ahead, one can see the headlamps on the side of the mountain as early morning risers already make the ascent to reach the summit for sunrise. 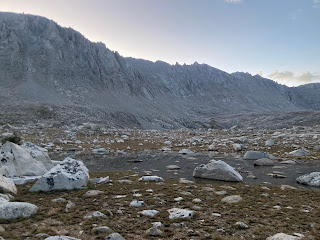 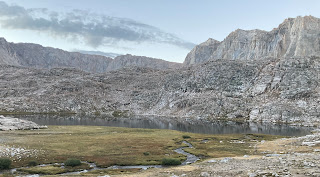 By the time sunrise hits, we have arrived at Guitar Lake, the last large accessible body of water.  We replenish our water supply, snack, and use the restroom - past this point (around 12,000 feet), there is no "using the facilities for Number 2" on the mountain.  One uses what is called a "Wag Bag", which is an all in one bag to capture and control the output.  One " uses" the bag which comes complete with toilet paper - the results are captured in "Poo Powder" (registered trademark), which solidifies the material - and which one then carries around for the rest of the hike.
Ah, the glamourous world of the mountain climber. 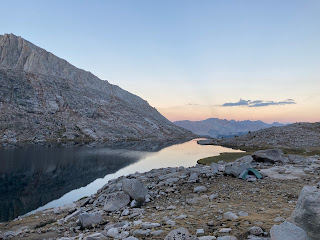 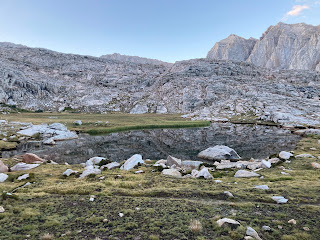 Past the lake, the actual ascent begins: a long somewhat gradual ascent up to a series of ten switchbacks which scale the side of the mountain to pack's rest.  The switchbacks themselves are not of even lengths - some shorter, some longer - but all up, though at not too steep an angle. 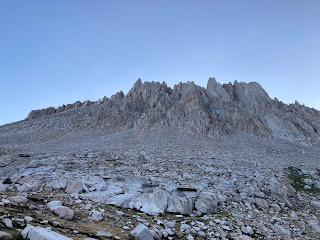 As we continue to rise, the landscape reveals itself along with sun.  Lakes which were previously hidden become revealed; mountains and peaks appear in new views as slowly, slowly we rise up.  Thankfully I am able to maintain the pace. 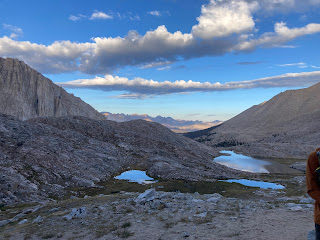 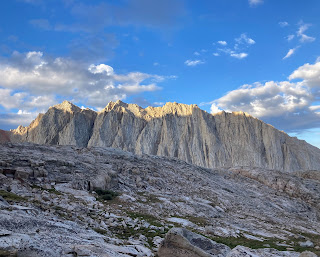 Sometime between 5 and 6 hours in, we reach Pack's Rest.  The sobriquet is well earned:  packs line the rocks and walls here, hikers that have left most everything and continued up.  The Outdoorsman offers to take my water and my school flag and let me leave my pack as well.  I gratefully accept; this more than anything else probably helps me to make the last part of the ascent.
At this point, we are about 13,500 ft. above sea level.  The last push starts. 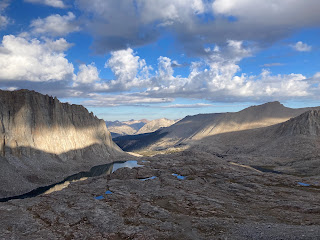 The path for the last part is runs along the side of the mountain to the summit; it is surprisingly wide to me (no sense of narrow path/plunging to my doom as I felt in parts of the Grand Canyon), although it sometimes seems less like a path and more like a series of rocks shoved into the side of the mountain for which we are slowly making our way across. 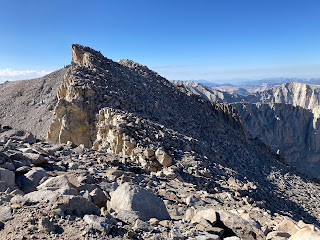 That line in the rocks you see is the path. 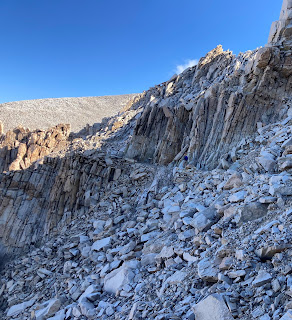 As we continue on, I continue to slip farther and farther behind my "group". Part of it is just the terrain; I tend to pick my way across and over.  Part of it is the altitude: by this time, I am definitely feeling the impact of thinner oxygen. 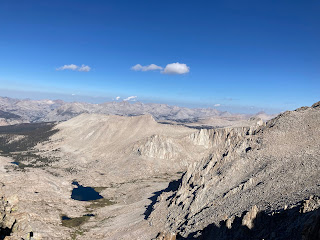 That rounded peak at the left/middle side of the picture is the summit.  This is about halfway there, with about a mile to go. 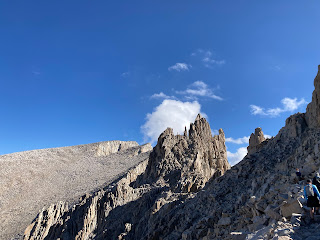 As I continue to walk, I rise above the clouds. I can see visions of the valley below now, peaks of a far distant land invisible to us until this point.  Hikers start passing me as they come down the mountain as I go up.  "You are almost there" they encourage as they walk by, "the view is worth it".  I sigh.  I am continuing to slow down.
The last part of the summit is likely 100 yards or so, a slow zig zaggy uphill trail that is not too challenging for footwork.  By this point I am moving in 5-6 foot bursts:  I see a turn in the trail and that becomes my next stopping point.  I catch my breath, look for the next point, and then pull myself up, largely by my hiking poles and upper body strength.  My legs are just kind of along for the rid. 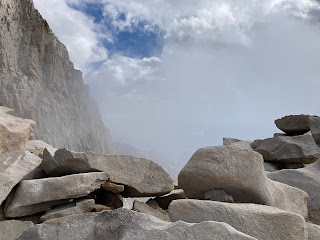 And then, suddenly, I arrive. 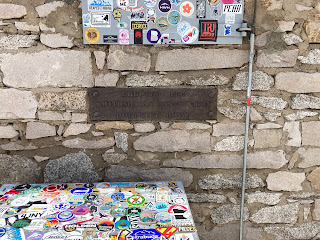 I am not the last one in our party:  our oldest member, 70 years old, is still on his way up. I am greeted by The Outdoorsman and others.  A the Guide shoves a peanut butter and honey tortilla into my hand - "Eat" he says, "you need the calories".  I hunch over and eat my tortilla, feeling less of elation and more of exhaustion. 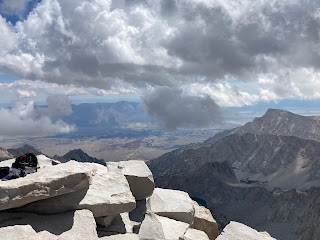 The Outdoorsman and I take our picture, then he takes my picture with my martial arts school flag that I will send to my headmaster.
We share the summit with two or three groups:  5-10 college age/ young adults, a couple or two, and the inevitable teenagers that hiked up with no shirts and insist on doing pushups at the top.
Youth.  Wasted on the young. 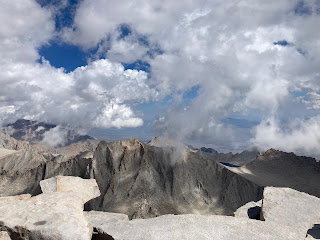 Our last party member arrives about 15 minutes after I do.  We celebrate again, and take pictures of our party to send back.  We continue to snack, hydrate, take pictures, and take in the view.  Within 20 minutes or so after that, it is time to head down - partially because of the time it will take, partially because of the potential threat of rain (one of my biggest fears - rain and wind on the side of the mountain - was thankfully not realized.  I completely credit praying about it in the morning). 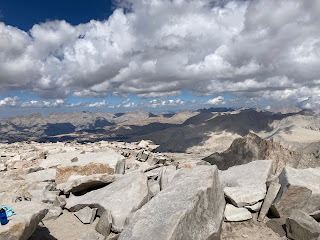 The hike down is a quicker affair:  it took me almost 8 hours to get to the top and will take me 4.5 hours to get down.  I almost immediately shed speed as soon as we leave Pack's rest, rapidly falling behind the rest of my party. My energy level is simply not back to what it was when I started out in the morning.  I start down the switchbacks, counting them off as I go, seeing the heads of my group below and beyond me as I continue to lose speed. 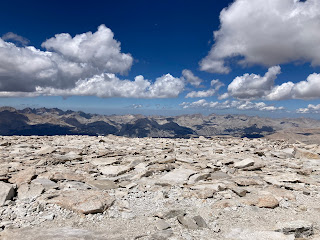 By the time I hit Guitar Lake, I am in the back with rear guard.  We rehydrate again and continue on - I get off track slightly, but we rejoin the very last members of the party and slowly hike out. 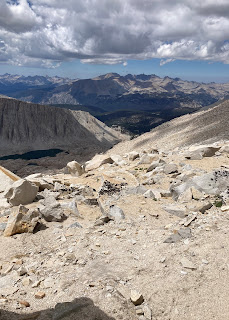 While I would love to say that I took pictures going down and on the latter half of the hike where we originally walked through the dark and now in the light, that did not happen.  The trip down looked, largely, like the trip up; and by the time we reached the "new" part of the hike my only real interest was getting back to camp.  The scenery was as beautiful as anything we had seen to date, lakes and streams and trees.  The four of us slowly plod along, taking frequent rests. 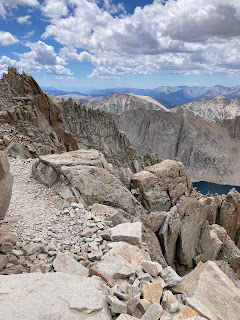 12.5 hours later, we make it into camp.
Dinner that night is a celebratory "lasagna" of tomato paste, cheese, and broke in half lasagna noodles (which, amusingly enough, our Italian Guide A mutters about "lasagne" under his breath and recipe interpretations).  We are all, even in our exhausted state, on something of a high:  we did it.  Individually and as a group, we ascended the tallest peak in the lower 48 states.
The Outdoorsman brings out a flask of whiskey he brought with him just for the occasion.  Everyone - even the non-drinkers - have a small taste.  We toast ourselves and our accomplishment. 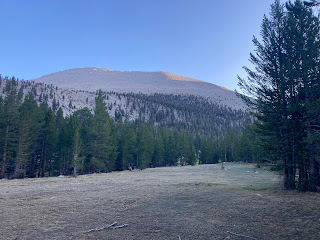 As I lay in the sleeping bag that night reviewing the day, I am both amazed and surprised:  amazed that I made it up, somewhat surprised that exhaustion overcame elation.  There were people that were genuinely excited at making it to the top; I was more exhausted and "Oh Dear Lord, can we beat the rain down?".  That does not take away from the accomplishment of course; it just surprises me that it seems like less of a "thing" than I expected.
As I fall asleep, I am already working on better conditioning practices for the hike next year. My muscles did not fail me this time, but my endurance did.  Visions of stair masters and longer training hikes fill my head as a last vision of the clouds rising and valley below come in before I collapse into a well earned slumber.
Posted by Toirdhealbheach Beucail at 2:00 AM