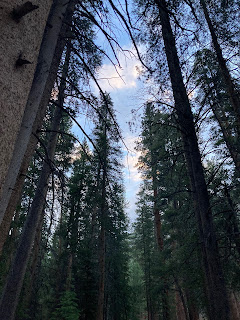 There were only a few residual clouds as we got ready to leave this morning after a breakfast of sausages and English muffins - fortunately the rain had mostly been early in the night and not returned, so there was only minimal moisture on tent flys and ground covers to be managed
Our path today was essentially one long uphill,  out of the Kern Valley and over a high meadow that would eventually lead us to our base camp for the attempt on Mt. Whitney the following day. 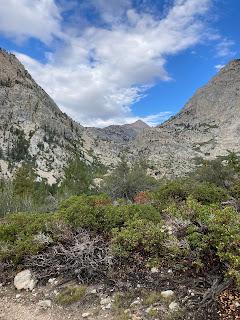 The morning hike was (thankfully) a rather gradual one, with a well laid out path and not too many rocks or giant steps.  Rain threatened throughout the morning, but hung back as we slowly wended our way through the rocks and pines. 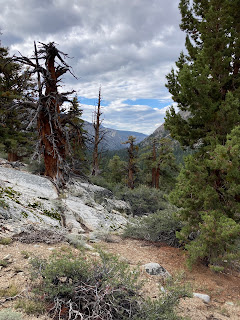 Our lunch stop at a stream and meadow brought foil bagged tuna to which cranberries, sunflower seeds, and Italian dressing could be added with the hard crackers known as Wasa.  This was a fabulous meal - self contained in the bag, full of calories, and  - hey - crunchy carbs.  I may try to replicate this in my "normal" life. 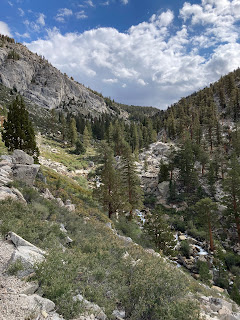 Following lunch, we continued up and around, still heading uphill.  At some point we began to drift apart due to speed and for the first time on the hike, I found myself truly alone.
I also found myself rained on again.  Heavily, off and on, for about two hours. 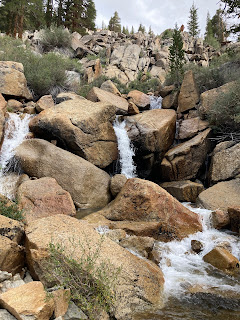 The scenery at this point really started changing.  Gone were the underbrush and pines; what was remaining were the sequoias and rocks.  It was a stark landscape, made all the starker by the grey skies and grey rains that entered and left at their own whim. 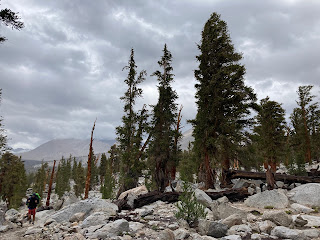 At one point - the rain coming down harder - I simply stopped and waited under a tree for a bit to watch at the meadow below.  We were certainly not in any kind of hurry, and being an introvert, the time alone and with the rain - one of few sounds to be heard - was welcome. 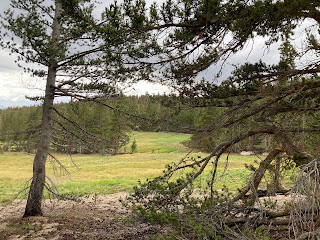 The Sequoias were amazing. I had never seen them before in this abundance or size - at best if we have them at The Ranch, they are small spindly things, not the giants that loomed - living and dying - over me. 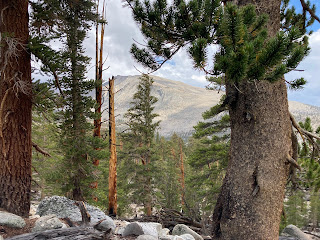 Our arrival at camp that afternoon was a bit complicated as the place we were going to camp was already occupied, so we ended up crossing the stream and finding a second spot farther on.  It was doubly complicated by, just as we were completing the tent set up, a downpour swept through that lasted 20 minutes  (and revealed some poor positioning of tents, as well as my continued lack of planning for rain) - but within thirty minutes of that, the sun was out and we had things hung on trees to dry. 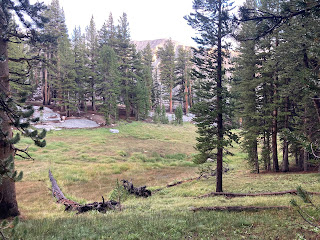 Dinner tonight was jambalaya, a standard camp meal (easy to transport and prepare) and a mint chocolate square for dessert.  Everyone turned in early, both because of the rain and well as what would be an early start on Mt. Whitney the following day.
Posted by Toirdhealbheach Beucail at 2:00 AM