On Day 0 of the hike - true for both of the hikes that I have been on now - one meets "the team".

Like our Grand Canyon Hike, the team consisted of two guides - our Lead Guide D, a gentleman in his 40's who looked every inch the muscular hiker and Associate Guide A, an Italian in his early 20's that had taken his month of vacation in Italy to come lead a hike - and 11 souls who for 8 days would be thrown together into a form of Long March uphill. 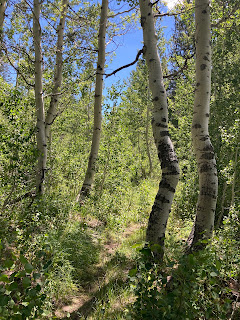 I have always found this sort of thing awkward - to be fair, I find most social events awkward - but this is one of the things that the sort of group hike both encourages and needs:  the group succeeds as a team, not just as individuals.  A successful hike, in this case, would be if everyone reached the summit, not just some of us.
Our team was broad mix:  myself and The Outdoorsman of course, a mother and daughter duo from more Northly climes, a couple in the late 60's/early 70's, another couple in their late 40's, a grandmother in her early 60's from nearby, a gentleman in his mid-50's who had years of Scouting participation, and a woman in her early 40's from the ocean.  All of us had some hiking experience; no-one had fully completed this hike before (that would be The Outdoorsman, who had to turn back last year after a team member was ill). 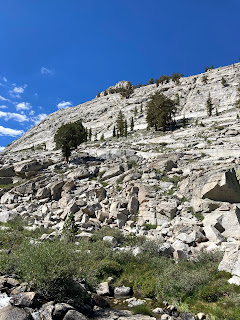 After the initial meet and greet, we all packed into either a van or a truck to begin the 2+ hour drive from the meeting place to the trailhead where we would be starting from the next day.  The conversation was the sort of thing that is likely to occur at most any sort of event like this:  Where do you live?  What do you do?  Where have you hiked?  Have you climbed Mt. Whitney?
The basic conversation of those learning of others and their boundaries. The odd thing - odd to me, anyway - is that within 2 days, these seemingly isolated group of people would come together in ways that you would not have realized possible from meeting in a parking lot and a van ride.  People offering to carry things for others, to share snacks or a shelter when the rain poured down.  Making sure that everyone made it to every stopping point and that no-one was ever truly left behind.  Celebrating each other's triumphs as one by one, we marched on a road towards a mountain that loomed not so much in our sight as in our minds.
How does such a thing happen?
I ask how, of course, because in society it never seems to go that way.  We live in our separate little worlds - work, activity, religious observation, volunteerism - and too often scarcely know a thing about each other at all.  I could barely tell you about many of my coworker's families; by the end of this trip I knew about everyone's family or lack thereof,  what their children were doing, and how they each filled their time.  In eight days I learned more than I have learned about some others in 5 years.
Why? 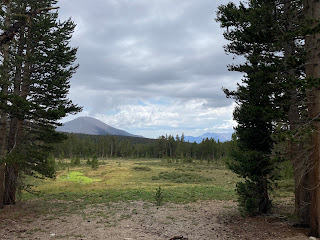 It could be, of course, the simple expedient that without any kind of cell phone service or InterWeb, we were forced onto each other. It could also have been that the single goal we had in mind formed a glue - unseen and unrealized - that slowly drew us together invisibly until we no longer thought of each other as anything other than the hiking friends we thought we had been.
But maybe there is another factor.
Too often in my own life, I find myself consumed by a world of inputs that nibble away at my time and my energy.  This needs my attention; that needs doing.  Before long I am awash in things that steal my attention.  On the trail there is none of that; there is merely the slowly walking in a direction towards a goal.  Literally besides the scenery, you have nothing but each other not only to lean on, but to fill the time and yawing gap of what would be other activities.
I wonder: instead of "team building” events we often have to participate in for the vain hope a connection is to be made, perhaps we should just send everyone on week long hikes.
Posted by Toirdhealbheach Beucail at 2:00 AM