(Author's note:  I have been giving some consideration to how describing my hike will go.  I suspect it will not be linear but rather the descriptive interspersed with single subject essays)
Almost as soon as we had finished our hike of The Grand Canyon in November of 2021, The Outdoorsman suggested we consider another one.  I was feeling rather game - after all, the hike into The Grand Canyon had been amazing and gone better than I had anticipated, for never having hiked before.
How, he suggested, would I feel about going to Mt. Whitney?
I reviewed the information - 8 days, 75 miles, summitting Mt. Whitney.  Sure I thought, why not? 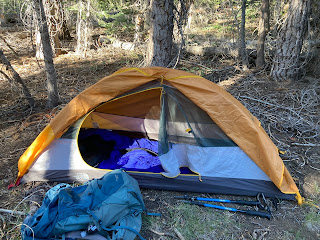 For the 9 months leading up to the hike, I worked hard to prepare physically for the hike.  Not knowing how to train for high elevation hiked, I went with what I knew:  weight training, weighted vest walks, and a stair master.  I scrupulously avoided reading about the hike up to Mt. Whitney - perhaps an oversight, but like The Grand Canyon, I wanted to keep my mind open about what it was going to be like (while I still should have read more about the hike, I do not know this was a bad philosophy, specifically about Mt. Whitney.  Likely I would have talked myself out of going at all).  I added in training hikes with The Outdoorsman to get some hiking practice as well (This was actually one of the most valuable decisions I made).

And then, of course, the world just happened. 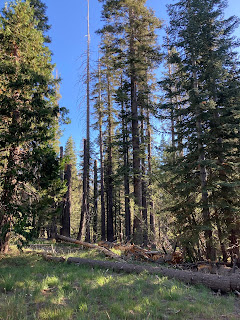 TB The Elder passed away.  Work exploded, as I seemed to be buried under a mountain of work that only seemed to escalate as the day got closer, to the point that I was working 12 hours days, sitting at the computer typing and talking, grabbing meals and bringing them back to the desk,  My world was becoming a long tunnel between the bedroom, the kitchen, and the desk.  It seemed there was no reason that I could leave.

And yet the day came, and I left. 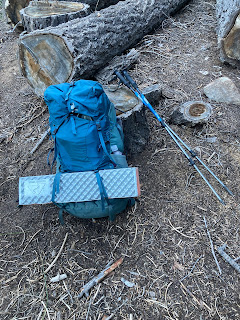 I only realized (after the hike) that I had baggage that I was carrying, baggage that was as heavy as the full backpack you see above.   It had become the combination of a lot of things:  deciding what to do about The Ranch and when to go, a work where I still feel I am neither fully engaged nor fully functional yet always busy, and the ever nagging sense that I am simply not really "doing" the thing I am called to do.

Packs are heavy things for 8 days; heavier only are the packs which our minds bind to us.