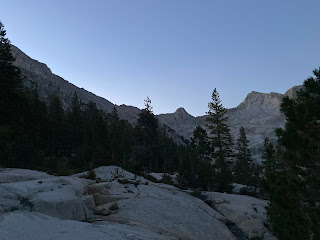 This morning, after a breakfast of granola and fixings, we packed up to head for our first truly challenging ascent:  Colby Pass, 12,000 feet/3567 m above sea level.  If you look in the picture below, just to the right of the trees on the left is a small dip.  That is what we were headed to. 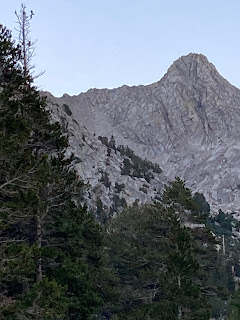 The ascent quickly led us up past Colby Lake for one last view. 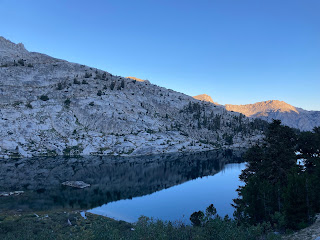 As we arrived at the based of the ascent to pass, one thing that quickly stuck out was that there was no clear path to the top.  Not to worry, assured our guides:  It is there as a series of switchbacks that can be ascended. 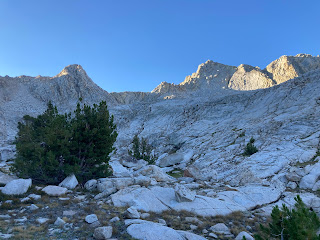 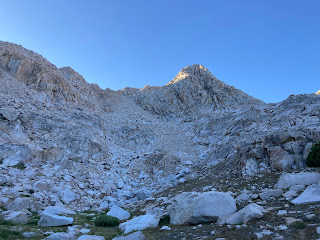 If there was a path there, it surely did not reveal itself to my eyes. 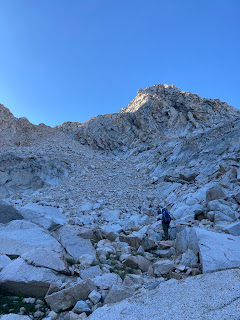 In hiking, of course, there are only two options:  go up or go back.  Going back was at least three days of hiking back to a trailhead with a van that was no longer there, so the only option was to go up.
This was hard climbing, some of the hardest that I have done. It was not that I felt like I was ever in any particular danger of falling off, just that due to the steepness of the pass it was pretty much directly up from switchback to switchback.  Adding 30 lbs of supplies and gear to your overall bodyweight just makes the issue that much more "invigorating". 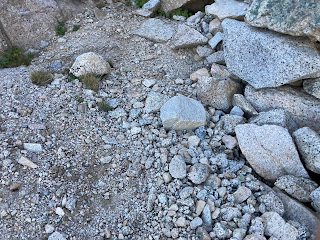 Looking up is of no benefit either:  If one is lucky one sees nothing; if one is not, one sees the heads bobbing from the climbers ahead of you.  Somehow that makes it all the more depressing, seeing how far you have left to climb. 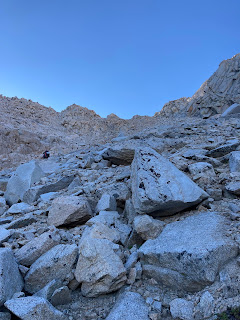 The trail never really "evened out":  It was always up and up and up and an angle.  My stops got more and more frequent; hauling myself forward with my hiking poles became more and more of a thing.  For such a relatively short distance, this was both physically and mentally challenging. 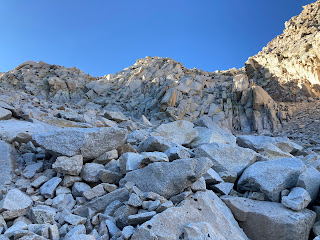 And then - after walking and stopping and looking back at the view and giving up on looking ahead because it is terribly depressing, one looks up - and suddenly, the top is in sight.
Never have I been happier. 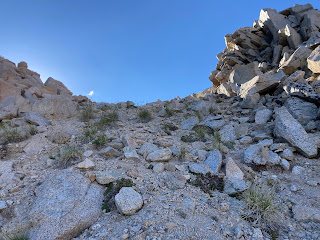 I was midway to the top of the pass as I stumbled over.  We waited as the remaining members of our team pulled themselves over the top as well, then celebrated with water and a snack.
Colby Pass, as it turns out, mattered a great deal. 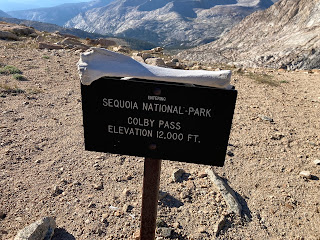 For myself, Colby Pass was the first truly significant hiking challenge I met on this hike - yes, there were ascents and descents, and yes, they were challenging - but Colby Pass was the first one that had me doubting whether or not I could complete this hike, let alone scale Mt. Whitney. Standing beneath the pass, looking up at what appeared to be a solid rockfall wall with no path and being told we are going up and over, was disheartening.  Actually realizing what the climb involved added nothing to my encouragement.
But I made it.  And later - several times on this hike, including ascending Mt. Whitney - when I felt that I simply could not go on, I reminded myself that I had climbed Colby Pass.
If I could climb Colby Pass, I could do anything. 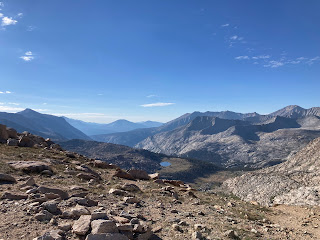