Book Review: Live Not By Lies

"What does it mean to live by lies?  It meant, Solzhenitsyn writes, accepting without protest all the falsehoods and propaganda the state compelled its citizens to affirm - or at least not to oppose - to get along peaceably under totalitarianism.  Everybody says that they have no choice but to conform, says Solzhenitsyn, and to accept powerlessness.  But that is the lie that gives all other lies their malign force.  The ordinary man may not be able to overturn the kingdom of lies, but at least he can say that he is not going to be their loyal subject." - Rod Dreher, Live Not By Lives 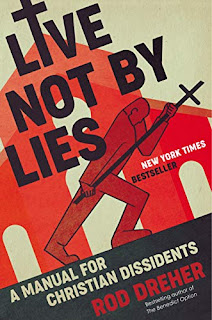