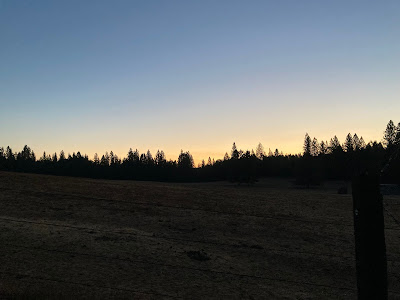 I had an epiphany this week.

I am not quite sure when I turned the corner on this issue.  It has been within the last two weeks.  And I cannot tell you precisely what contributed to it, but I can tell what seemed to contribute to it.

But I can tell you the moment it happened.

The "what" seems to have been a series of thoughts and readings over the last two weeks, apparently just overlaying each other:  The Benedict Option.  Live Not By Lies.  Taking time away to train with my coach, The Berserker.  Coming to The Ranch, as I have for over a year now.  Visiting with My Dead.  And lastly - just this week, Claire Wolfe's latest post, Our job, should we choose to accept it...  It is, apparently, dangerous to read things and think about them at length.

The Why?  Because the writing of the past two weeks reached a crescendo that manifested itself in Claire's post.

"Last week, I wrote that freedomistas had just two jobs to do in our new totalitarian society: live with the ugly reality and plan to outlive it.

The catch, of course, is that neither of the two jobs is simple or easy.

Part of those jobs involves developing parallel systems, or even parallel societies as described in “How to Escape a Sick Society.” We need, as human beings and as a culture, to “route around” the damage of totalitarianism. By routing around, we accomplish multiple good things, from weakening the power of the oligarchy to giving dissidents a way to live and thrive to (potentially) replacing the oligarchy without bloodshed when the day comes.

Really we won’t end up with one, or even two or three, parallel societies, but thousands of them."

All of a sudden I realized what I had been missing, what has been a drag on my thoughts and emotions for months now, maybe even years:  I have been fighting a rearguard action.

It is not, I think, a secret that on the whole I despair of society in its current form and where it seems to be headed - and I am not the only one, not by far.  But what hit me as a bolt of lightning is that both sides of that argument - what society seems to be becoming and those that oppose it - are looking back both back into a past that no longer exists and will not come again and a future that has nothing under it except hopes and wishes and checks that cannot be cashed.

What they are both missing - what I have been missing - in the concept and idea of building something new.

The underlying thoughts that motivated all those posts above as I wrote them were one of two things:  either acknowledging that what is being done is not working and building something - whether societal or in my own life - that will be a way to manage, cope, and thrive under such conditions as well as hopefully endure.

The past?  It matters.  Roots matter.  The great thoughts of the past matter.  History matters.  But trying to build on past systems that have effectively failed of their vision leads nowhere, even if it seems like an point of view or ideology is "winning".  The forward motion that is present is the declining power of inertia; given enough time, "winning" will itself turn into a rearguard action.

Ah, but to build!  To create!  To manufacture systems and ways of connecting and conducting life - preserving all that is good of the past but not hemming our lives in solely by it - this is forward looking, this is taking action.

This is hope.  This is life.

By mostly dumb luck (and their graciousness), I have learned to follow some amazing bloggers.  Go follow Leigh and Dan, or Dawn McHugh, or Rain, or Patrice Lewis, or my friend (and official optimist of The FortyFive), Ed.  They are all in the process of building things (they might not define themselves as totally doing that in the way I am thinking of, but I will go ahead and just define it for them as that is what they are doing...).  They experiment.  They build networks around their experiments.  They share information.

In some small fashion, they provide hope.

This is not meant to say that there is some sort of naïve optimism at work here - indeed, in some ways things seem  darker than ever.  But rather than curse the darkness, in their own way all of them (as well as Claire) have chosen to light a candle.

Can you remember a time when you became really excited about doing something?  Do you remember the energy and optimism you felt, how you were awake at night thinking about it and up early anticipating it?  Yes, that feeling.  That is what suddenly hit me at 6:30 in the evening on Wednesday night.

There is a life to build.  There is a society or series of societies to build.  In a way, it is like actually getting to play the Old "Now Available for the Macintosh" version of Sid Meier's Civilization or any of the "Build Your Own" cities/zoos/rollercoaster games.  Except this time, it is for real.  What could be more exciting than that?

Go light a candle.  Go be a raging fire.