These are my Dead.

Growing up, I thought that everyone had their own Dead.  It was only later I learned that in fact no, most people did not their own Dead - or at least their Dead all in one place, that they were scattered out hither and yon, a continually growing root system as people and families moved. 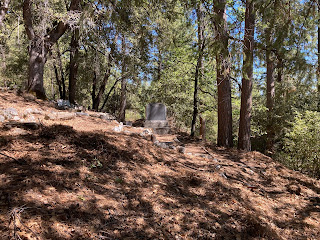 There are not all my Dead, of course.  They are maternal grandmother's Dead.  Gathered here are the patriarch of the family, who traveled halfway across the country chasing a dream, and his second wife (his first one went back as it was too far away) who was his business partner's daughter.  Most of their children are buried here too:  two that died from Scarlet Fever (a third died from Scarlet Fever visiting his grandparents back East, and was buried there), and the three sons and one daughter that survived (the daughter being my great grandmother).
In turn, my great grandmother had two husbands and eight children, all daughters.  She and both her husbands are buried here as well, as was her second daughter, who passed at three years old.  Finally, my grandmother - who in many ways held the closest connections here - was buried, as well as my grandfather.  The graveyard has been undisturbed since then, for almost 30 years. 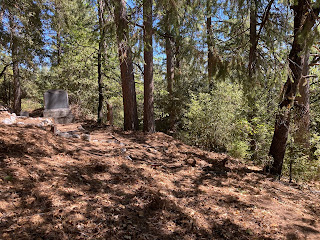 The town that my great-grandfather came to thrived, and then withered away when the industry that created it could no longer be practiced.  The family lingered, continuing to chase down the dream as people left and the world moved on until the last great-uncle that lived in the family house built by hand on 10 acres died in the 1950's and the house then burned down in 1960.  Everything was lost, except for pictures and one oil chandelier than hangs at my parents' house.
But the Dead remained. 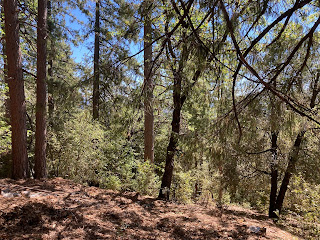 Growing up, we would come up every Memorial Day with my grandmother and grandfather and one or more of my great-aunts (the Aunties, we called them - I only ever knew direct relatives like aunts and uncles; the distinctions of familial relations escaped me until I was older).  We would rake the graves of their interlaced pine needles and oak leaves, wash down the headstones and markers, put in flowers and water, and have a picnic (an odd memory: it was the first place I ever ate Pringles potato chips).  Every year, we would go - until my grandparents and the Aunties' passed away and even my parents' generation grew too old to negotiate the hillside and not slide on the pine needles and I, who in some ways became the last one of my generation to go along, moved away.
I drove my mother up here a year ago.  We walked out to the top of the graveyard.  She did not remember ever coming here. 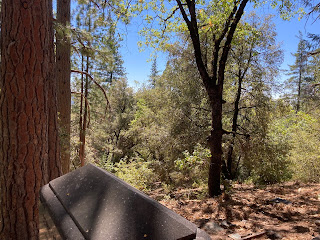 I went up this weekend and raked off the pine needles and oak leaves, pushing them down the hillside in anticipation of coming up later this month to inter my Aunt J on the grave of her mother (my grandmother) as my grandfather is now interred.  My uncle said he will come dig the hole for my cousin, who is 3 hours away, but it seemed meet that he not be tasked with preparing the overall site. 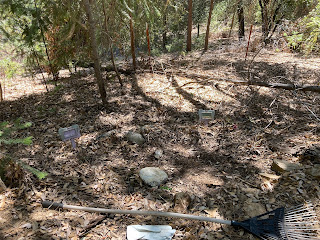 Down the hill from my Dead, there were two grave markers I originally found 40 years ago.  I never found others this far down, although they must be there.  They have no one to care for them now, so that falls to me as well. One of the name plates has fallen out (I did a quite search but found nothing; I may need to return with a metal detector), but the other one still remains. 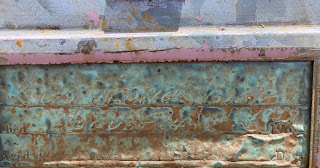 I have no idea who Sua Long Bing was, or how they came to be here.  I can see from the name plate that they passed on 04 August 1957 and their age was listed as 113; I believe memory serves that their spouse was the other nameplate.  If true, that means they died very far home and undoubtedly without anyone left to remember them.

They, too, are now my Dead.

With burial of my Aunt J, the graveyard will begin to reach the end of its lifespan.  My mother will undoubtedly be placed there someday, as will their older brother, my uncle.  But of their generation, no-one goes there now or has gone there for many years - as mentioned above, as families have spread out, the dead lay where they lived and no-one left of my mother's generation may remember it is here.  I am sure beyond my sister and my cousins, no-one in my generation remembers it is there either.  And with those two burials, it is likely that none of them will have reason to return.

It will fall to me.

I will become the Rememberer, the Old Mortality of Sir Walter's Scott's book of the same name, wandering among the gravestones, the last caretaker of four generations to do so.  It is not so much as a task given as a task unconsciously appointed. Someone has to do this, in some way to keep the dead in memory and honor.  Not that such a loss of memory will matter to them of course, or to the world at large.

It will, however, matter to me.