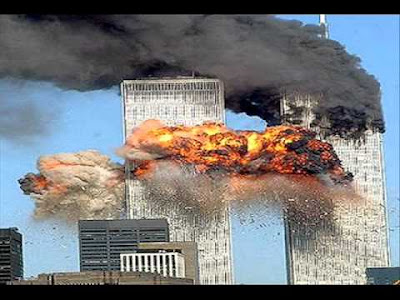 I was driving to work.  It was a morning like any other morning. I had just crossed one of the two bridges I had to cross in the pre-dawn darkness. The talk show I always listened to was chattering away.

Then the host came on - somewhat confused, he announced that a plane had hit the World Trade Center.

From there, the drive to work became a series of worsening news:  a second plane hitting the World Trade Center, a plane hitting the Pentagon, the collapse of the Two Towers, and a final plane crash in Shanksville PA, destination unknown (we knew later, of course).

I called my future business partner, Himself. "Look at the TV" I told him.  "Really, what is up?" was the response.  "Look", I said back.

The silence on the other end of the line was deafening.

I arrive at work at my usual time, 0530.  By 0900 we were all sent home - who knew where the next plane was likely to hit?  We sat for the rest of the day, eyes glued to the screen and ears to the radio, as the description of the World Trade Center continued to roll in:  Plane parts falling, people falling, firefighters and police charging into the buildings as people fled them - and the buildings falling themselves.  And then, the endless digging, looking for survivors with occasional wins, until the wins stopped altogether.

As I look back over the last twenty years, I have to ask the question "Who won?"

Certainly we have not had such an attack since that date, so in that sense "we won" - but at the cost of thousands of dead, thousands more wounded, and literally trillions of dollars.  All to find out, as it seems, that twenty years of fighting was not destined to destroy the ideology that enabled this or the people that believed in it.

But twenty years has drastically changed us.

We now shuffle through airports like cattle, benignly taking off our shoes and putting our items on the X-Ray track.  We lock our pilots behind doors and only use the front lavatory one at a time.  Almost no-one meets anyone at the airport anymore:  you cannot go greet someone at the gate so we just call at the luggage carousel and wait to get picked up out front by the letter "J".  Travel, once a gateway to parts unknown, has become a series of holding pens and lines.

Our e-mails, phone calls, and other communication modes (texting was not really a thing in 2001) can now be captured and stored by the government, theoretically only with permission but that feels to be observed as much in the breech as in practice.  Our financial transactions are more and more limited: too much money might make you "of question".

We are less free personally and economically and far prone to government oversight and actions "for our protection", yet somehow feel no safer.

In the end, who really won?