The name Rod Dreher was one I was not terribly familiar with until last year, mostly in the context of being belittled by Conservative writers who considered him something of a unrealistic dinosaur with the vague aroma "Old School Christian and Unrealist".  I read the comments and thought nothing of it - after all, there are plenty of individuals that write on the InterWeb - until in several postings Claire Wolfe mentioned not one of two of his books and the concepts and writing in them very favorably.  And then he showed up in one of Joel Salatin's writings as well.

I like Claire and respect her opinion.  And I am becoming more fond of Salatin.  And the longer I read some of those other commenters, the less and less I find I have in common with them - so if they are opposed,  probably worthy of a purchase or two (Yes yes, I know - I swore off buying any new books until next year.  Forgive me, I am a flawed sinner like all...).

And so, The Benedict Option:  A Strategy for Christians In A Post-Christian Nation. 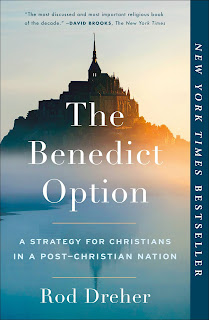 The Benedict Option starts with a basic premise:  The United States has become a post-Christian nation and not only a post Christian nation, but an aggressively post Christian one.  He quotes conservative Anglican theologian Ephraim Radner: "There is no safe place in the world or in our churches within which to be a Christian.  It is a new epoch".  He notes that the seeming abundance of churches (the book was published in 2017) is not indicative of the actual state of the church, based on demographic trends and that fact that with the end of the Cold War, the thin Christian veneer is "all finally being stripped away by the combination of mass consumer capitalism and liberal individualism".

"Americans cannot stand to contemplate defeat or accept limits of any kind.  But American Christians are going to have to come to terms with the brute fact that we live in a culture, one in which our beliefs make little sense.  We speak a language that the world more and more cannot hear or finds offensive to our ears."

He then posits a solution:

"Could it be that the best way to fight the flood is to...stop fighting the flood?  That is, to quit piling up sandbags and to build an ark in which to shelter until the water recedes and we can put our feet on dry land again?  Rather than wasting energy and resources fighting unwinnable political battles, we should instead work on building communities, institutions, and networks of resistance that can outwit, outlast, and eventually overcome the occupation.

Fear not!  We have been in a place like this before.  In the first centuries of Christianity, the early church survived and grew under Roman persecution and later after the collapse of the empire in the West.  We latter-day Christians must learn from their example - and particularly from the example of Saint Benedict."

Benedict of Nursia (480-537 A.D.) was a young Italian nobleman who went to Rome  to complete his education and then serve in the government.  Disturbed by what he saw there in the post-Empire Visigothic Rome, he retreated to a cave for three years for a life of prayer and contemplation.  After three years of living as a hermit, he acquired a reputation for piety and holiness and was asked to be an abbot at a monastery.  As part of the monastic experience, he wrote the Rule of St. Benedict, a guide to living in the community - and thereby established almost accidentally the Order of Benedictine Monks and the monastic community in the West.  It is this sort of community that Dreher suggests that Christians are called to become part of again - not as monks and nuns specifically but as Christians living together in community, supporting each other and their commitment to Christ in a world that at best sees them as anachronistic and at worst as an enemy to be eliminated.

Dreher moves in three streams as he writes: In one stream, he writes of the revived monastery of Nursia (now Norcia, Italy) with interviews of the Abbot and the brothers that live and their understanding of the rule and how it functions in their daily lives.  In a second, he discusses how the Post Christian World we are in came to be (In six easy steps over 700 years, in case you were wondering) and what that actually looks like in the worlds of religion, business, education, sexuality, and technology.  In a third, he looks at people who are actually doing this right now in sundry ways through world by starting schools, reviving communities, starting businesses, and preparing themselves for the Long Night - not in the sense of apocalyptic terms, but in the sense of how the Church was treated and existed under unfriendly regimes, be it the Roman empire or modern Communism.

Two items of note which could be considered complaints and worth dealing with up front:

1)  The first is that in reading reviews of this work, one counter complaint that comes across is that Dreher was not proposing a Christian solution.  Christ never proposed running from the world but in engaging with it.  That interpretation, in my point of view, is partial correct.  In point of fact Christ did send His disciples out into the world to preach the Gospel.  However, if one reads the rest of the New Testament beyond the Gospels, what one finds is that the apostles spend a great deal of time talking about Christians in relation to each other.  The expectation is that Christians will support each other and be a part of each others lives in meaningful ways.  While they may not have specifically looked like a monastic community or even a somewhat separated community, I think it is also fair to say that times determine the means:  The Rome of Paul and Christ had a functioning government and legal system, the Rome of Benedict did not.

2)  The book, both by title and content, is primarily directed at Christians - but I would argue, not exclusively so.  Recent developments should have convinced almost anyone that in point of fact most governments these days are leaning in Totalitarian directions, and today's group of accepted non-conformists is tomorrow's group to be thrust aside and brought under. And Dreher is also pretty clear that communities are not exclusive in the sense that should not reach out and make alliances with other like-minded people wherever interests collide (I believe his book Crunchy Cons was about this very subject).  And certainly the principles espoused in the book could be applied by literally any group that is seeking to create an island of civilization and culture in a rising tide.

As may be obvious, I liked this book. I am inclined in this direction anyway as regular readers may be aware, and in super small ways (buying old books and saving them) I am trying to preserve Classical Culture (if your community or monastic-style organization needs such a person, do not hesitate to reach out!).  And this book is rich, not only in stories but in ideas and their application - so rich, this review does not even begin to scratch the surface (because I really want you to read it).  And a man that, beyond a fabulous set of new writers I have never heard of (but need to acquire their books as well, apparently) quotes C.S. Lewis,  Wendell Berry, Aleksandr Solzhenitsyn, Dietrich Bonhoeffer, and Vaclav Havel - all heroes of mine - is someone I at least need to become more familiar with.

But this book was hard for me too.

It was hard to read the words  "The culture is lost" and that in reality, the Benedict Option is building for a world that we who are now living will likely never see.  Hard for me, anyway - even in my wildest rantings and ravings here, there is always some small part of me that believed that there was still an ember to be brought back into flame.  The reality - the cold reality that is evident since this book's publishing four years ago - is that there are no embers left. There is only the scattering of embers on the wind.

The Benedict Option, then, is to catch those embers, nurse them back into flame in a thousand small places, and then bring them out again when the the current zetigeist of modern culture and thinking has come to its logical conclusion.

An quote early in the book by the philosopher Alasdair MacIntyre from his book After Virtue sums up the whole situation quite nicely and could just as well have served as a capstone for the entire text:

"A crucial point in that earlier history (the fall of the Roman Empire) occurred when men and women of good will turned aside from the task of shoring up the Roman imperium and ceased to identify the continuation of civility and moral community with the maintenance of that imperium.  What they set themselves to achieve instead - often not recognizing fully what they were doing - was the construction of new forms of community within which the moral life could be sustained so that both morality and civility might survive the coming ages of barbarism and darkness."