As you may remember from last month, I am working on the concept of Clay Pot Watering (using Clay Pots as a storage reservoir for water).

These were the two I used last month.  I have tried to push away the mulch to show much more damp it was than soil farther away (but foiled by a bad camera angle): 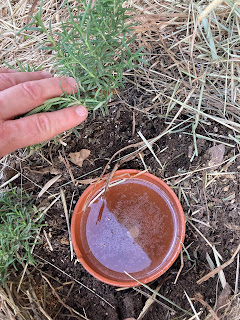 Both plants are doing well.  Other than a good dose of rain - 4.5" about a week ago - they have only been watered by the ollas): 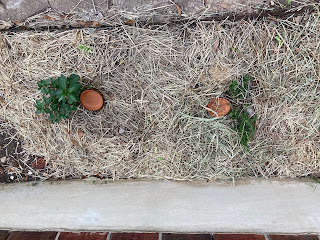 Now that I knew what I was doing, it became much more of an assembly line operation (complete with adult beverage): 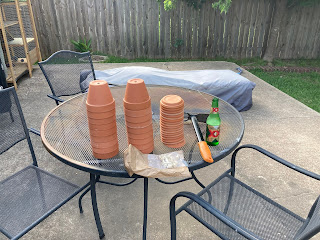 Installation is the same as before: 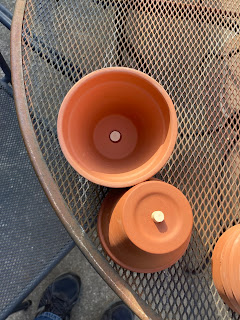 And the work goes rather quickly.  One thing I will note is that more pots, there is more variety in how the plug fits into the wholes.  Quality control appears to be not as much as I could have desired, but then again, at $0.98 a pot, I do not have much to complain about: 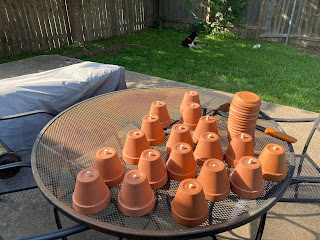 One supports my thriving pepper and tomato bushes: 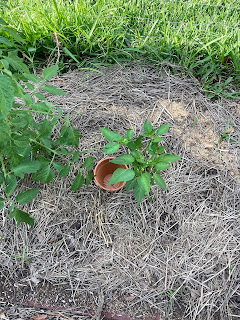 A third one between the mint and rosemary for some yet undetermined plant: 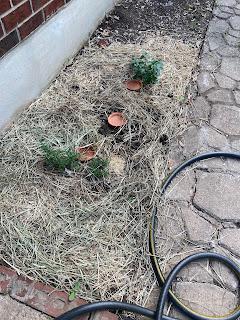 Laying out down the Center. I obviously do not have enough pots (the offset pattern seems to be the best way to get coverage): 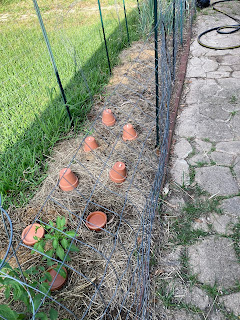 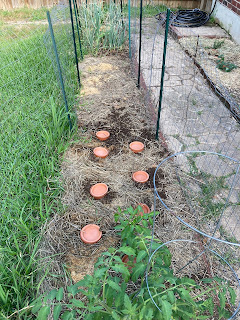 Some at the other end of the garden too: 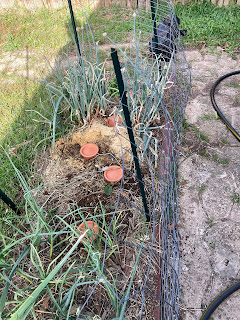 The basil plant is on the end, the most dry part.  This will be my field test: 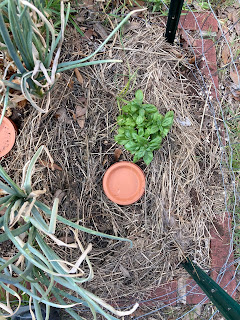 From having used them for a bit now (and refilled them at least once), I can tell the following:
1)  A filled pot lasts about two days.
2)  Why did I not get bigger pots?  The pots were available, but not the base - and paying $4.00 per a "bulb" base seemed like a waste of money.
3)  Coverage seems to be about 2-3 inches from the pot.
4) In some cases upon refilling them,  I found where the stoppers were not a precise fit.  I inverted some, which seems to have taken care of the problem.  For others, I will have to seal them.
5)  It is making a difference.  I did a planting of potatoes today and the soil around the ollas was noticeable more moist than farther away.
6)  Cost remains at about $3.25 per olla. They are reusable - but, if they break, I will hardly lose too much sleep over it (I am betting I can reuse the stoppers, however).
I have to confess that I am more excited than usual about my gardening this year!
Posted by Toirdhealbheach Beucail at 2:00 AM

Email ThisBlogThis!Share to TwitterShare to FacebookShare to Pinterest
Labels: Gardening