Sometimes the timing of when we find something makes all the difference in the world.

When I was in high school and in my regional record store (we called them that, back in the day), I had a choice in buying a Celtic music tape.  One was hammered dulcimer; the other was some group I had never heard of.  I bought the hammered dulcimer tape, which I did enjoy for many years.  The tape I skipped over was one of the first albums of what became a very famous Scottish Band, Silly Wizard.  Had I chosen that tape, my musical experience would have been completely altered.

Or my experience with Gene Logsdon, whom I revere as an author, farmer, and contrarian.  I read his book The Contrary Farmer in 2000, right when we were moving back closer to my parents and The Ranch.  I was searching for someone who spoke the language of agriculture and philosophy in an engaging way - and that was the book Logsdon wrote and I had picked up.  If I had picked up one of his earlier, more advice oriented books  on small scale grain raising or raising blackberries, I might have read it, gone "Hmmm", and moved on.

This is my relationship with Joel Salatin.

I should like Joel Salatin.  From what I have read of him, we share a similar philosophy, religious bent, and general distrust of government.  But the books I have read of his have never really got me excited, wanting to read more.  The books I have - You Can Farm, The Sheer Ecstasy of Being A Lunatic Farmer- have been, well interesting and informative, but not captivating.

We finally made the connection. 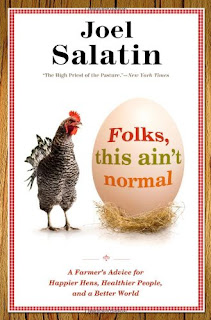 The book is, in a nutshell, a review of the food system as it exists in the West and the governmental system (mostly in the US) that undergirds it and allows corporate agriculture to exist.  It is divided into two sections (I am not sure if that was accidental or just the way that Salatin's mind worked).  The first half is really a discussion of how the system that has been constructed to supply food is not normal at the micro level, the level of the individual and the farm.  The latter half of the book is a discussion of how the system, enabled by government and favoring corporate agriculture, operates on a macro level against the small farmer and back to the land movement.

As with other reviews, it is best to let the author speak for themselves:

"The same teen who can't legally operate a four wheeler, or all terrain vehicle (ATV, commonly known in the vernacular as Japanese Cow Ponies), in a farm lane workplace environment can operate a jacked-up F-250 pickup on a crowded urban expressway.  By denying those opportunities to bring value to their own lives and community around them, we've relegated our young adults to teenage foolishness.  Then as a culture we walk around shaking our heads in bewilderment at these young people with retarded maturity.  Never in life do people have as much energy as in their teens, and to criminalize leveraging it is certainly one of nation's greatest resource blunders.

Our culture now denies young people the very activities that build their self-worth and incorporate them as valuable members of society.  Rather than seeing children as an asset, we now view them as a liability." - "Children, Chores, Humility and Health"

"No civilization has ever been in this state of environmental ignorance...But in recent decades, in our culture, putting food on the table does not require any knowledge or involvement except how scan a credit card, open a plastic bag, and nuke it in the microwave.  No civilization in history has ever been able to be this disconnected from it ecological umbilical.  And in more frequent dinnertime discussions, I'm finding more and more people wondering if a civilization this disconnected can actually survive." - "A Cat Is a Cow Is a Chicken is My Aunt"

"True food security is the historical normalcy of packing it in during the abundant times, building that in-house larder, and resting easy knowing that our little ones are not dependent on next week's farmers' market or the electronic cashiers at the supermarket." - "Hog Killin's And Laying In The Larder"

"Innovation always requires risk.  That is the nature of the game." - "Lawn Farms And Kitchen Chickens"

"With all this in mind, though, instead of picking away at the edges and challenging with the most fringe possibility, why don't we focus on the great majority for whom the idea is doable?  Instead of saying ideas are stupid because not everybody has land or room for a chicken yard, how about realizing how many people living on city lots, in the suburbs, or rural farmettes don't do any of this stuff?  The truth is that if the majority would do the innovative right thing, the culture would change so dramatically we probably can't even conceive what the next tweaking would look like." - "No Compost, No Digestion"

"A homemade pound cake, made with real raw ingredients, will only last at household room temperature for a couple of days before mold spots start dotting its exterior.  That is why I eat this pound cake quickly and aggressively - immediate consumption is my personal preservation policy towards pound cakes." - "No Compost, No Digestion"

"When someone says 'The only way to fix this is..." I immediately tune him out.  Almost nothing can be fixed only one way." - "Scientific Mythology"

"Do we really want society's bottom feeders to be in charge of our air, soil, and water?  Compare that with the culture in Spain that manicures cork forests to grow the world- famous acorn fattened black-footed hog.  In that culture, the man who knows  how to prune the cork trees is revered as much as the medical doctor."  - "You Get What You Pay For"

"One elderly farmer friend recently explained it this way: 'Everything is about recreation.  America is one big playground.  Your farm and my farm, they're just a big playground.'  I daresay he is right.  The boldness exhibited by some groups to either take private land or narrowly define its use would make the founders of this nation start the revolution all over again." - "Get Your Grubby Hands"

"I think our culture is paralyzed, again, by constipation of imagination.  Is there no recourse for redress other than litigation." - "I Hereby Release You"

"I'm surround by a loving family - multiple generations.  I'm surrounded by enthusiastic young people.  I'm surrounded by land that I've watched heal over these last fifty years, from a worn-out, gullied mess to verdant pastures supporting poultry, cows, pigs and rabbits.  The intensity of my feelings springs from the intimacy of my knowledge of this place, its surroundings, the weather patterns, the season.  I believe this is historically normal, and I covet that for others.  Now go be a normal person." - "The Church Of Industrial Foods"

There is more. Plenty more.  There are more quotes I highlighted, but ran out of space to enter.

Another interesting thing about Salatin is that he is intensely practical.  Each chapter of the book has actions that you can take.  And they are pretty specific, very doable, and occasionally very revolutionary.

As you can guess, I liked this book.  Salatin has matured as a writer - he confesses in the acknowledgements that this is the first book (2011) that he has had an editor on, and I think it shows.  His thinking is clearly and has all the vitality, vivacity, and vitriol that I would expect from someone that lived a life similar in many aspects to Gene Logsdon: obstinate, succeeding against the grain of a society that says only the big and completely scientific can survive.  The book is practical in that the steps he suggests are not improbable or completely unactionable.  And he has a healthy distrust of the government and large industry, something dear to my heart.  Were I to recommend a first pass for a new reader of Salatin, I would start here.

It took almost 25 years, but I am glad we finally connected.