When I was in the equivalent of Middle School (my school, at the time, had one class per grade), I developed an intense and burning interest in World War II.  I could not devour history books fast enough (back in the day, that is what we had) and exhausted our local library's ability to provide them.

As it turned out, my mother had some books - all fiction -that dealt with World War II on the shelves that lined the hall in our old house.  One of the books she suggested to me and I had read was still on her bookshelf when I looked at The Ranch:  H.M.S Ulysses by Alistair Maclean. 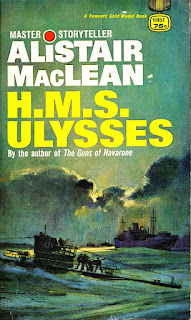 Maclean is probably better known for some of his later works (The Guns of Navarone, Where Eagles Dare) - H.M.S. Ulysses, it turns out, was his first novel.

The book chronicles the adventures of the H.M.S. Ulysses, a light cruiser (based on the Dido Class), in the 1942-1943 era of Atlantic naval warfare.  The ship serves as an escort to convoys on the North Atlantic Arctic Convoys between Iceland and The Soviet Union.

The reader is dropped directly into a visit with the senior staff and the Director of Naval Operations after a mutiny: the men are exhausted because of the runs and the Admiralty has decided that, as redemption, the ship will run one more convoy (FR 77), before being reassigned to the Mediterranean.

I remembered this book when I saw it.  I have not read it in 40 years.  Reading it again, I am reminded why it made such an impression me.

It is written by an expert writer who himself served in the British Navy and on these runs in the Arctic.  He knew, like perhaps few writers do, what Arctic cold and Arctic weather felt like:

"The cold was now intense:  ice formed in cabins and mess decks; fresh water systems froze solid, door hinges locked in frozen immobility; the oil in the searchlight controls gummed up and made them them useless.  To keep a watch, especially a watch on the bridge, was torture:  the first shock of that bitter wind seared the lungs, left a man fighting for breath.  if he had forgotten to don gloves - first the silk gloves, then the woolen mittens, then the sheepskin gauntlets - and touched a handrail, the palms of the hands seared off, the skin burned as by white-hot metal.  On the bridge, if he forgot to duck when the bows smashed down into a trough, the flying spray, solidified in a second into hurtling slivers of ice, lanced cheek and forehead open to the bone.  Hands froze, the very marrow of the bones numbed, the deadly chill swept upwards from feet to calves to thighs, nose and chin turned white with frostbite and demanded immediate attention then, by far the worst of all, the end of the watch, the return below deck, the writhing, excruciating agony of returning circulation.  But, for all this, words are mere things, pale shadows of reality.  Some things lie beyond the knowledge and the experience of the majority of mankind, and here imagination finds itself in a world unknown."

The cold is always in the book; it never leaves the pages even though it is not always mentioned.

The convoy suffers from every possible setback:  weather, enemy attack (this is when Germany still controlled Norway and threats from U-Boats and aircraft and the surface ships of Kriegsmarine were real), internal dissension, and the slow destruction of men physically and mentally.  At the same time, one sees the growth of men who, having realized they have nothing left to lose, turn themselves into something more fearful and heroic at the same time.

To tell the ending is to spoil the work; it is a work well worth reading, a tautly written prose tale which reached out to me in surprising ways 40 years after I had last put it down.  In it, oddly enough, I found a germ of what I have come to believe that all leaderships should entail:

"And so he  had come back to the service and had grown older as the bitter years passed, older and frailer, and more kindly and tolerant and understanding.  Among naval captains - indeed, among men - he was unique.  In his charity, in his humility, Captain Richard Vallery walked alone.  It was a measure of the man's greatness that this thought never occurred to him."

I have read a great many books over my life, many of which were read once and put aside, a few that were read multiple times, and a very few that I remember from reading them, even long ago.  H.M.S. Ulysses is one of the latter, and this edition will continue to find its home with me, be it here or at The Ranch.

We are always in need of being reminded of great sacrifice, great courage, and great heroism.