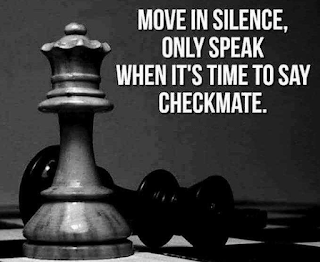 One of the more beneficial events that has occurred as a result of being here at The Ranch, largely alone for three weeks, is that one has a great deal of silence.  It does make you ponder about speaking.

Yes, speaking in any time or venue.  But in these times more than ever, saying anything at all.

A sword, it has been said, is most dangerous when it is in its sheath, because everyone else does not know what the next action is.  Draw the sword, and one has committed, not only to a course of action but to a limited series of attacks and cuts.  Show me how how have your sword held - high, middle, low, behind you, to the right or left - and I will have a fair idea of the number and kind of attacks you can make.

Not merely in the dredging up of old comments (although that is a real fear now), not merely in the off comment that spills unthought from our lips, but in the conversations and discussions (and more and more, screaming sessions) that dominate our public and in some cases, our private life.   Expose your words thoughtlessly, let them run like a river either from a lack of care or too much, and you have given all your unfriends all they need to know and predict how you will act.

Remain the King on the Board.  Remain the sword in the sheath.  React only when you are ready to act, and not before.

Until then, be silent.