Update:  My father continues to improve.

He has become more and more coherent - evidenced to both my sister and myself.  He is remembering more things and his conversations are becoming more focused.  He still has difficulty with the fact that my mother is not dead, and it appears he does not remember the last month, as if it was expunged from his mind.  I am no psychiatrist nor a neurologist, but I wonder perhaps if this was the way his mind decided to help relieve him of any guilt or sadness by placing my mom in a memory care facility - that combined with stress, poor nutrition, and a lack of sleep anyway.

I was able to speak with his case manager today as well.  Per their commentary, they are attempting to get him physically better - "functional mobility", yet another new term - and hope to release him at the end of this week or next week to the facility he was living in - conveniently (and literally) across the parking lot.  Interestingly there was no comment on any cognitive issues whatsoever.

No update on my mother's appeal.  My sister will call again tomorrow.

Finally, thank you all so much for your continued thoughts and prayers (and yes, I still covet them).  The change in my father from even a week ago, let alone two weeks ago, is dramatic.  I am certain that your prayers and thoughts and God's hand are very active in this.

Karen (Hobo) got me thinking about bulbs.  My parents planted two kinds here. 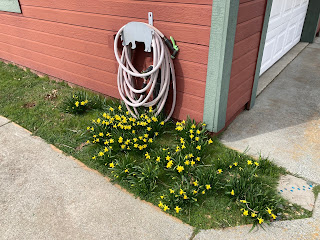 The first, Daffodils, are one of my mother's favorite flowers - good heavens, they are even one of mine.  They also bear the privilege of being the only flower of which I know in a foreign language - Jonquil - which seems to capture them perfectly, a sort of jolly sunny bright flower that returns year after year.  They bring a smile to my face every time I walk by them now. 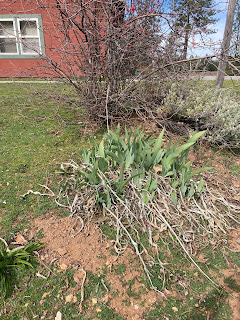 The second, Irises, are coming up but will bloom later.  These bear even a deeper memory for me.  Irises were the favorite flower of my material grandmother and these bulbs were actually taken from here backyard.  My parents have been here at least 20 years so they are at least that old here; perhaps add on another 20+ years for their age in their previous home?

It strikes me as odd - and at the same time "homely" in the old sense of the word - how such a simple thing as flowers can bring back such memories.  We do not do these sorts of things as a culture so much, I trow:  we have moved more and more to virtual representations of our memories, ions and pixels that live on our small screens and computers and are there only when we remember to pull them out and look.

The flowers, of course, bloom year after year, disregarding any such nicety as being pulled out of a pocket to be viewed.