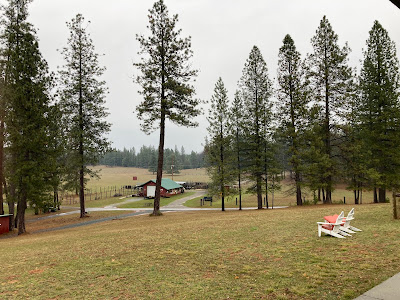 It is a rainy afternoon as I write this.  Off in the distance, the cattle are over in the Upper Meadow eating through drizzle, having finished up the good hay and are now picking up everything else.

It is more green than brown now, more living than dead, as has undoubtedly happened every year I have come here although I do not remember it as such always - for many years (most of my childhood anyway), there was only "green" or "brown".  The subtleties of life renewing itself were lost on me.

When it rains, the clouds always hem us in here.  It is if the world has been reduced to the border of trees, while outside - "Here There Be Monsters".

New Home is not like this.  Even when the fog and clouds come, one always is aware that one is surrounded by a pulse of life around.  Always, there is traffic running in the background.  The bark of dogs, the sounds of people - there is never the sense that one can get away from the world; the world is too much with us there.

I am more than aware that in reality, even here the "world" is still out there.  I have been following the news, and from the view of someone that has tried to keep the world at arms' length for a while, it seems that we are rushing toward the Abyss as quickly as we are able - economically, domestically, internationally, religiously, culturally, in every fashion and and on every front.

Yet all of that seems strangely remote here - indeed, if I were not connected to the InterWeb I would scarcely know that any of it was happening as I have dispensed with television long ago and the radio is, as often as not, just a ceaseless chorus of yammering and music I can scarcely recognize or listen to.

True, at this moment - or this one, or this one - fire could descend from the sky and kill us all or I could simply die from a natural condition.  But even then, I would know no different than I would if I would continue to look out the window and away from the world, watching the cows graze and the grass slowly turn to green.  Yet in this topsy-turvy world, I would be considered the fool for ignoring the world and "hiding" from it.

My response, of course, is that I see the world perfectly fine.  It is those who look everywhere else that can see nothing.