The Speed of Travel As Measured By Foot

Over the course of our hike my brother in law (he keeps showing up here, so he is hereby dubbed "The Outdoorsman" from now on) and I did a total of about 28.8 miles of direct hiking to get to and from our destination over three days.  We broken it into two days of 7-8 mile hikes and a single return of 12.8 miles.

How long, I wondered as I trudged along, does it take one to hike? 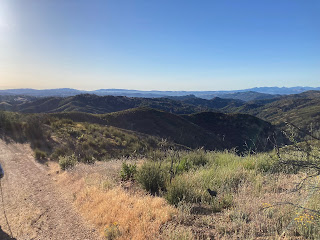 Timewise of course it varies.  The first day we made 7 miles in about 5 hours, but that was with a 1.4 mile almost vertical (at points) hike up a grade at the end of the day (the first time in a long time my legs have felt shaky at the end of the day).  The second day we made the same distance more or less in 3.25 hours, but that was due to rolling hills along a ridgeline rather than climbing slopes.  The third day - the return - it took us 6 hours and 10 minutes to make it all the way back (note these times are inclusive of things like rest stops, snack breaks, and lunch where required).

But how long, I wondered, does it really take. 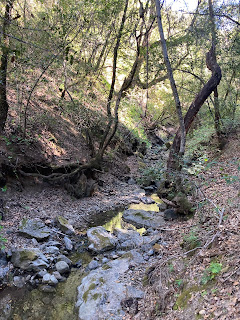 Hiking - at least the few times I have done it - is endlessly fascinating to me on the mental side.  At some point in the hike one realizes that one has to keep going.  If one turns back early one loses the progress and once one has arrived, there is no way back except to come out the way that one came in:  by foot.  As a result, my mind set has to shift a great deal - after all, even in this hike we are discussing 3 to 6 hours of time which may be spattered by conversation but is largely conducted in silence.  Thoughts in the mind like "Are we there yet?" or "How much have we come since the last signpost?" are as counterproductive as they are annoying (let alone if you start verbalizing them to your hiking party.  You may end up "lost"...).

From the little I have read on the subject, this is a reality for long distance runners and ultramarathoners as well:  how does one keep the mind engaged (and on what) as one pounds through the miles and hours of going across distances? 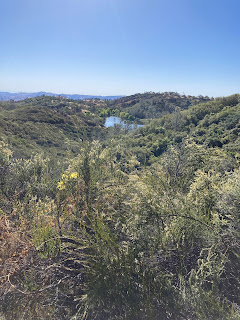 For me, it seems to become almost a form of moving Zen.

A lot of attention is paid to the trail, of course, especially if one needs to pay attention to one's footing or, if I am headed up hill, to the placement of the hiking poles as I pull myself up.  I look at the trail - after all, am I not here to see the scenery?  I am walking through it.  I look for things that I usually do not see, like wildflowers that are new or odd plant and rock formations or even vistas.  But other than that, I find that I am largely in the movement of moving through the landscape, sweating or shivering as called for, grateful for the shade and breeze in the heat when they come or the sun on the colder moments when I can step into it.

For me at least, I end up thinking a lot as well.  The genesis of this post was on the trail, as are the genesis of a number of others (all noted in my phone before they slipped away).  But interestingly, what I did not think about - once - was what I was missing at work or (more than idly) how far we had to get or when the next break was.  In that sense there was no "then" or "other", there was only the "now".

So what is the speed of travel as measured by foot?  What it has always apparently been, it seems:  one foot at a time in a timeless sense where there is neither truly arrival or departure, merely the space between each step.

Email ThisBlogThis!Share to TwitterShare to FacebookShare to Pinterest
Labels: Hiking