Be Wise, Change Yourself 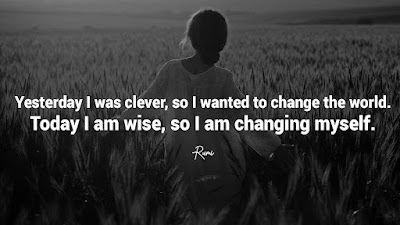 One of the changes in the last two months that has happened - almost imperceptibly, until it suddenly reached the point it could not longer be ignored - is that I have surrendered the idea of "changing the world", even in small portions.

It is a funny thought when it suddenly hits one:  the years spent brooding over the state of the world, perhaps some forays into making things "different" or "better" or that most elusive of items, "changing other people".  Years of grousing about how things are not going the right way and that if only - if only - the world was changed, it would be better.

And then - suddenly - it disappears.

Can one change the world by changing one's self?  Certainly.  Many people have done it: 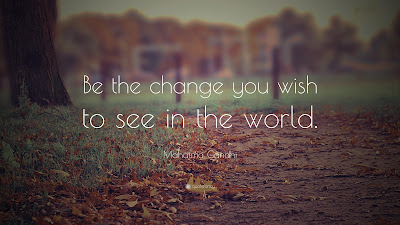 But change by personal example takes a great deal more time than change by brute force or "movements".  And it is not nearly as rewarding in that the progress I see will often see glacially slow, or not even happen.

But that, ultimately, is not really the point.

Stoicism would tell us that the only things we can control - and thus we can change - are ourselves, our actions, and our reactions.  Christianity teaches that salvation is a personal matter: we cannot be saved on behalf of anyone, it has to be for ourselves alone.

Changing ourselves is an exploration that literally has no frontiers or boundaries.  We can always be working - every second of the day if we desire (although that might be exhausting) on making some aspect of ourselves different, and (presumably) better.  There are no laws, no restrictions, no "things that have to happen" for us to start.  Today.  At this moment.

Ultimately in the course of time, it is the wise ones that are remembered and revered far more than the clever ones.  Let us then seek to be wise and make the change that we can always guarantee will be accomplished.

Let us change ourselves.

Email ThisBlogThis!Share to TwitterShare to FacebookShare to Pinterest
Labels: Changing My Life