The Memory Of Grass I

One thing that struck me on my recent hike was the grass. 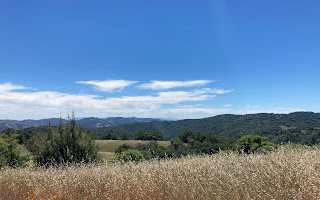 Native grasses are ubiquitous in Old Home, as they are The Ranch.  They appear every year:  green waves that grow and ripple in the breeze, only to dry out and turn golden, lying to the outside observer that they are anything more than effectively ornamental retainers of the soil at that point.  Every place that civilization has not touched, there you will find the native grasses.

What struck me this time, as I hike over the hills, was that I was assigning to grass something it simply did not have:  history.

Native grasses, at least where I am from, are annuals.  They grow and die off every year.  To the outside observer, the grass can appear exactly the same as it did in previous years - certainly, there are years where things may grow less high because of drouth or higher because or an abundance of rain, but generally it appears the same.  To my mind, I suppose I "associated" this with the fact that at some level, the grass is a constant.

It is a constant.  But it has no memory. 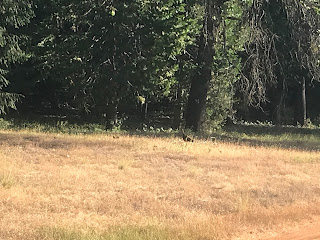 Every year, 100% of the annual grasses die off.  It is a cycle as literally as old as this climate has been established:  around late October or November, the rains come, and the seeds that were cast abroad the year before begin sprouting up amongst the skeletons and bodies of their parents.  They continue to grow and flourish through November to February before reaching peak green in March or April, when they begin dying off.  It happens in the valleys first and then slowly works its way up the mountains to where The Ranch is.  By June, there is nothing left but the golden burnt yellow stalks, rustling in the breeze waiting for the cycle to being.

The grass grows where it has grown every year.  But it has no memory of what it was or why it is there.  Every year it starts off with no knowledge of its past (if plants had knowledge, I suppose).  If it were indeed sentient, what would it think about those stalks that first towered over it until they were consumed by it?  What or who were they?  What did they do?  The grass cares not and if it does think such things, expresses them only as the wind blows past in words I cannot understand.

Back in the wilds of the 1980's, one of the most influential films I saw was, of all things, Tron.  The concept of a world within the computer - at a time when personal computers were really just being released on a large scale and the wonders of 1980's video games was a thing - was one that was mesmerizing to young teenage me.  Imagine the worlds that could exist!  Imagine the sights one could see - sights that simply physically could not exist in the "real world".

Many years later, I now live in an age where literally the breadth of human knowledge is either on-line or getting there as fast as possible.  Entire imaginary worlds actually do exist now on the InterWeb in the form of Massively Multi-Player Online Role-Playing Games (MMORG).  And now, thanks to the growth of the Blockchain, there are now new online worlds where individuals can "purchase" real estate (with crypto or real money, of course) and "earn" money.  All on-line, of course.  All not viewable with a computing device.

I love the fact that old books are available online- thousands of them.  I love that we can see old movies or clips, even things from the early 1900's.  I love that dying languages are preserved and I can learn how to graft a fruit tree with a video.

But that is also the problem.  It is all online, and more and more content is only online.  When the online fails - be it a power outage, be it the one server or hard drive on which it was stored, be it a media form that can no longer be accessed - it is gone.  Perhaps for a while, perhaps forever.

It occurs to me - as I watch the images and words flash on my screen - that I am watching a version of the native grasses on the hillside.  And were the power to fade or the data to be unavailable, we would find ourselves as a civilization with the memory of grass in  relatively quick order, with little knowledge of what went before us beyond what we can see and no understanding of how we got there.