Update:   Less of a good night and day.  My father was apparently restless all night, seeing and talking to  someone that the nurses could not see - conversations, she said, not just isolated sentences.  I have no idea who they were:  His Dead?  Us?  Angels?  I do not know, but only hope they can give him the comfort that we cannot.  They finally administered something to help him rest.  His blood pressure peaked a bit so new medication there.  We await the results of his Lumbar Penetration.

The nurse with whom I was speaking commented to me twice "Your father is so cute!".  Once, apparently he thought he saw someone behind her and called out for her to be careful; it was the wall.  The second time, the computer screen she was working at partially blocked the screen.  My father said something and the Nurse peeked around the computer monitor.  "Oh, it's you" he said.

Even in his delirium my father, ever the charmer.

The nurse thanked me for the privilege of being able to care for my father.  Where do we find such people in such a cynical Age?

My sister called with an update later, similar to mine but with the addition that the confusion and mental unraveling seems to be continuing apace.  She spoke with the doctor as well.  The EEG revealed nothing as did the data from the Lumbar Penetration.  They have recommended a CT scan from chest to pelvis to look for a mass and test panel which can take 10 days to get results as it has to be sent to the Mayo clinic.   They will try changing his anti-seizure medication to see if that helps with the restlessness and confusion.  Beyond that, the most likely plan is to work to stabilize him to move him into a skilled nursing facility.  And wait. 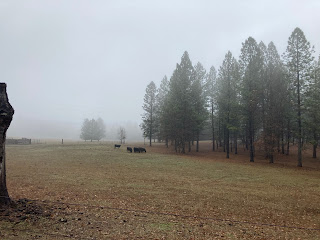 Mist:  Yesterday was a rainy day, the sort of day that if were not a work day, one would stick one's head out, cry out like Christopher Robin "Tut Tut, it looks like rain", and then retreat to the house for a day of reading and toast.  Sadly, it was a work day and so there was no reading to be done, only typing away as the rain fell until the end of the work day.  That said, I needed to stretch my legs and so down the road I went. 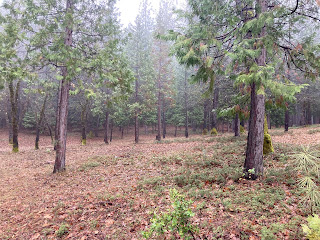 The mist perfectly captures my mood:  the feeling of being trapped in a bubble that is clear, but only within a certain line of sight.  Beyond it, things are hazy and unclear and cut off as by a solid wall.  Move, and the bubble moves with you, obscuring where you have come from and revealing - only a little where you are going. 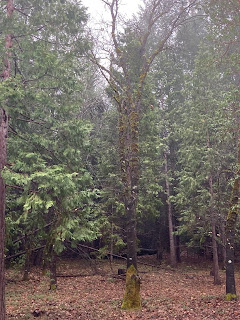 I clod down the road, the waterproof boots I am wearing (having, sensibly, worn them instead of my tennis shoes) keeping my feet dry but also creating a din as I pound down on the road grindings that form the driveway.  I have always tend to walk on the ball of my foot and drag my heels; the boots and chewed up blacktop make this all the more noticeable.  The woods are silent, the silence of the rain when every creature has elected to stay under whatever shelter it had.  There is no sound of man either:  the recreational walkers and possessors of the infernal motorized bikes have all sensibly decided, like the animals, to remain indoors.  Only I, the insensible, walk. 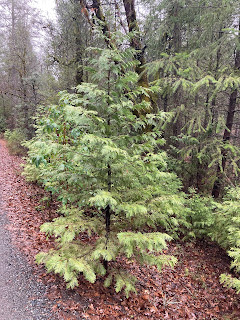 Certain trees always appear greener to me in the rain and mist.  I have no idea why this is so; it is not as if they are somehow changing their colors like chameleons, and even if they did this does not nothing to conceal them. 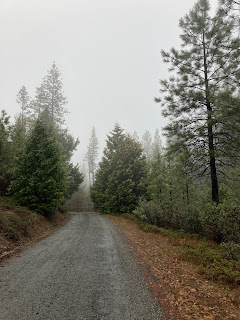 It is as if I am in my own world as I shuffle along, a very light rain dusting my jacket and head and the sound of nothing but me in the surroundings.  Even the road going home is obscured in the distance, a future that I know is there and know the nature of, but cannot see right now. 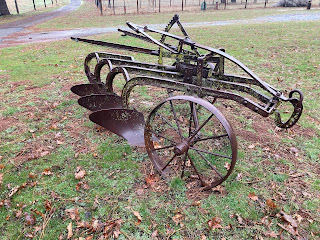 The rain puddles and drips off of the house and implements at barn.  Some of these are actually functional; some of this, like this plough, are just things that caught my father's fancy.  It would still work, I think, with a little effort and oil.  Sometimes I find that I am the same. 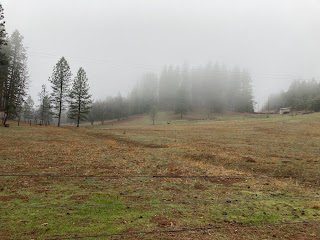 The meadow is starting to green up to the point that I can see it, as it passes away into the trees and mist.  Somewhere on the top of the hill is where the Tom Turkeys go to roost at night; I have seen them earlier today, strutting about even in the rain, looking for food and fights and love. 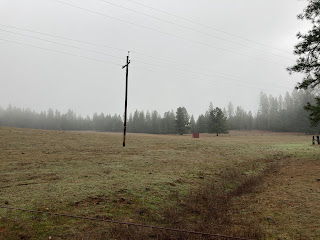 As I stop and lean over the fence to take this picture, two birds suddenly spring from cover in a burst of thundering wings and move into the field.  One of them eyes me reproachfully, as if it had not choice but to flee when it heard something alarming.  I nod back to it:  fly if you can, little friend.  Not all of us can flee at the sign of danger or distress. Sometimes we have to sit in the mist and wait for it to pass. 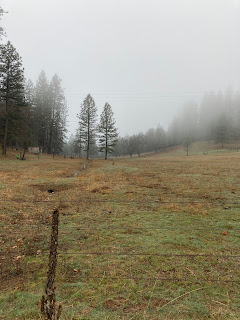 The runoff from the hill is starting to fill the seasonal rill that runs at the bottom of the valley, as it has every year I have come up here.  It is not running enough, given the date.  We need more rain and less mist, but every little bit helps. 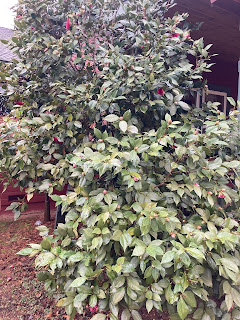 My mother loved Camellias.  They were in her wedding bouquet and we always had a plant - the same color as this - when we lived in the home I grew up in. 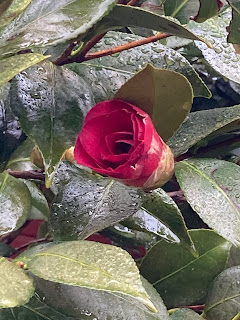 The camellias bloom, uncaring about all of the mist or rain or anything but what their internal timetable says to do. 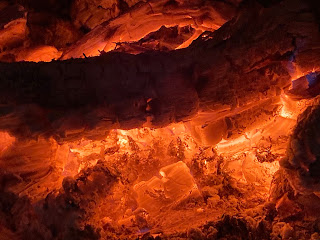 The fire, when I get home, is a seething bed of hot coals.  It brings to mind Orodruin of Tolkien's Lord of The Rings, Mount Doom, the only place where The One Ring could be destroyed.  The coals pulse and breathe as I open the door, the opposite of the mist that I have been walking through.  Instead of creating a bubble through which things cannot be seen, the fire destroys all that it touches - but delivers heat and light in exchange for its voracious hunger.
The rain begins again as I drop another log on the fire, the grey curtain descending to block out the world once again.