So this weekend I paid for a VPN.

A VPN, or Virtual Private Network (Truly, I have to look these things up):

VPN technology was developed to provide access to corporate applications and resources to remote or mobile users, and to branch offices. For security, the private network connection may be established using an encrypted layered tunneling protocol, and users may be required to pass various authentication methods to gain access to the VPN. In other applications, Internet users may secure their connections with a VPN to circumvent geo-restrictions and censorship or to connect to proxy servers to protect personal identity and location to stay anonymous on the Internet. Some websites, however, block access to known VPN technology to prevent the circumvention of their geo-restrictions, and many VPN providers have been developing strategies to get around these blockades." (Thanks, Wikipedia)

As I understand it, this essentially means instead of me floating around in traffic and calling from my home phone number, this helps me to essentially "call in" from an entirely different location - I can talk and interact normally, but to the larger InterWeb it appears I am actually calling in from Canada or Vietnam or Germany or wherever.

In the past I have been a great user of the "free" version of such things: so for example, I have use the free VPN function of my InterWeb browser (neither of the major players, whom I despise because they track me), free antivirus, free tracker blockers (Ghostery, which I do highly recommend), and a free optimization tool (Glarysoft, which I again recommend). Most of these have a paid alternative as well, but I have always opted out as I thought I was "safe enough".

However, given the ongoing and current state of affairs, I no longer consider that to be the case.

The software I got was from Nordic VPN and was attractive for two reasons: The first was that it came highly rated from a reliable InterWeb resource I have used in the past to assess such things, and the second was that they were running a sale (two years for the price of one - hard to argue with that).  A third selling point - once I got it - was the fact that it was incredibly easy for me, a complete novice, to set up: within 10 minutes I was safely behind the wall.

Here is an idea of what it looks like: 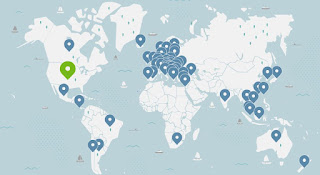 There I am, a happy little green dot in the middle of the US (Kansas or Nebraska, I think).

But there is a third, and slightly more concerning reason I did it: they are not based in the United States.

In reading up on them, they are surprisingly unwilling to reveal a lot about themselves. Here is their statement:

You may think me a bit paranoid for going to this length of action to protect myself, but to frank with you the future I see hurtling down the tracks is filled with fear and paranoia and surveillance and the writ of tyranny we see in the beginnings of "The Cancel Culture" At that time, whatever government is in power will want to know such things as where you go on the InterWeb, and whom you interact with, and what you speak of (Think I am wrong? Check into what China has already undertaken and see the future). It was for this reason I also moved the e-mail associated with the website to a server in Iceland (unseen.is, in case you are wondering).

I do not pretend to understand almost any of this. What I do understand is that an age of censorship and tyranny is rising and I need to do what I can to protect myself and be a voice of reason as long as I can. Even if that means a few more coins out of my pocket.

Email ThisBlogThis!Share to TwitterShare to FacebookShare to Pinterest
Labels: Going Grey In An Urban Setting