A year ago for Christmas, Nighean Gheal bought me some 3-D printed fantasy figures (rabbits with weapons and their opponent, a skeleton) for painting.

Once upon a time I painted this figures for fun, back in the day when they were all cast of lead and the small flakes that floated around were just additional mineral supplements (before we found out that licking lead paint was bad).  But that was long ago and the figures are long gone.

As turns out, I have some vacation time now - and approximately a month ago, on a whim I purchased a complete "Figure in a Box with Paint and Brushes and Instructions" - it was an Oni, or Japanese Ogre with a Naginata.  How could I say no to that? 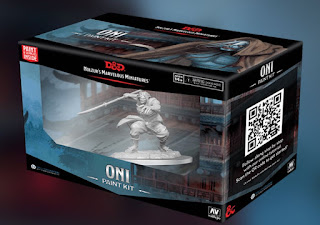 (Source)
So last week, as part of my "vacation", I started painting after a 35 year hiatus.
I started with rabbits' opponent, the skeleton, because after 35 years I thought I might need to "brush up" as it were, and as skeletons can be a mono color (white), that seemed easy enough.  The plastic paints as well as the lead ever did (although back in the day, we only had model paints, not paints specifically designed for these kinds of things) and using a brush was the same as it ever was.  I painted all but one leg (the one I was holding it with), allowed it to dry a bit, and then painted the other.  Then, I was "done"
Except that I was not.
There were still bits and pieces that needed painting, small cracks that had not been reached in my first pass or two.  I was going to press into them and "finish up" so I could move on and get something of my "relaxing list".  But then, I stopped myself.
This, I suddenly realized, was not an event.  This was an activity.
As I sat looking at the plastic figure that had pulled off its own arm and was using it as a weapon,  I suddenly became aware that I was treating this as I often treat many things:  a project or event that I needed to complete so I could move on to the next thing.
But in point of fact, this was not meant to be an "event".  This was meant to be an activity.
This has been a constant struggle in my life, if I think about it.  I am very "project" oriented at least in that sense, that things are there to be completed and the next thing moved on to.  It is what made me very good at education and reading books:  there was a set course, there was a timeline, there was a point of completion.
But an activity is far different.
An activity is something that, while it may have milestones, is never really complete.  Iaijustsu is very much like this.  Weightlifting is like this.  Even things like gardening and cheese making are like this - yes, there are points where the kata  is complete or the session finished or the vegetables and cheese harvested made, but we are not "done". We move on the the same thing, done in a different way perhaps, or even the same way.  Because the goal is the process itself, not necessarily the outcome.
This, to my mind, suddenly explained a great deal of my own issues.  How I often try to rush through something to finish it (and do it poorly) - because I think I have to get on to the next thing.  Or perhaps why there is always this nagging sense of not doing enough - it is not that I am not doing enough, it is that I am thinking of things in discrete tasks instead of totality of the activity.
I put aside the skeleton that day with the promise I would get back to it later, take another single pass at it, and then (again) put it aside.  Because, as I sat and thought about it, one of the differences between activities and projects is that activities are meant, like journeys, to be savored.  Rushing to get it done more quickly does not make it any more pleasant, it just denies the joy of the activity and having something to look forward to.
Also, it mars the final paint of your figures.

Email ThisBlogThis!Share to TwitterShare to FacebookShare to Pinterest
Labels: Changing My Life, Thoughts