In my post-arrival talk with The Cowboy, we always chat about things that have gone on since my last visit:  how the garden is going, how the cattle are doing, any repairs or improvements underway, anything that has gone wrong.  During our discussion this month, he mentioned a friend of his was dropping brush by to put on the burn pile for next burn season (I mentioned I had seen the trailer).  He also mentioned the same friend had a load of firewood he did not need.  The Cowboy did not need it either, but had the thought to just drop it off in front of our woodshed.  Would I be interested in it?

Free firewood?  Of course I am.

Here is the pile: 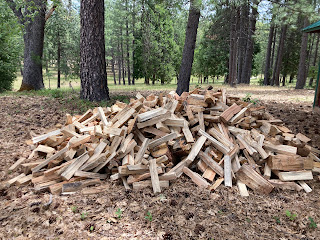 It was an odd mix of pine, oak, cedar, and even some other woods I could not identify.  The length of the logs was highly variable, which makes me suspect it was a combination of multiple exercises in wood cutting, perhaps even some clearing after our Winter storms.

The woodshed when I started: 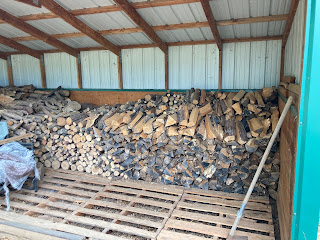 Stacking firewood is a rather pleasant task.  It keeps the hands busy at a level that allows thought and engages the mind at a low enough level that one can do the work and think or ponder on other issues - quite unlike the work I do now, which has no physical involvement and completely consumes the mind.

Stacking after Day one: 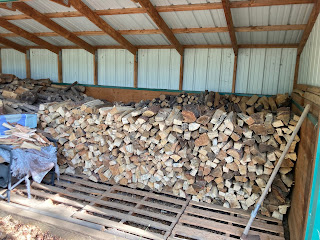 As I was in no hurry, the activity took  me about an hour a day after work.  My work pace was steady - after all, I just had to be done by the end of the week.  The work was in the shade of oak and pine trees, so it made it a pleasantly temperate task as well. 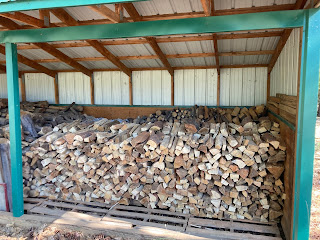 Whoever had collected the work had left a lot of smaller pieces in there as well - I effectively collected all the kindling I will need for a long time from what was in the pile, and ended up leaving a great deal of it on the ground as I simply ran out of room.  With newspaper here coming less and less easily (since my parents obviously no longer get the paper), I collect the local grocery advertisements and save them), it will become crucial in Fall and Winter.
Stacking after Day three: 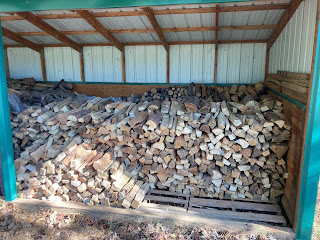 By my count, this is a bit above a cord of wood - and at the current rate I am here and how much I burn, will last me quite a while.

Out of curiosity, I checked in the local area here for pricing.  Prices ran anywhere from $700 for three cords of unsplit wood to $150 for a sixth of a cord split.  I have no idea what the actual value of this is and it probably fluctuates depending on where one is:  given the Winter we had this last year, I suspect our local area is awash in wood, not so much in the more urban parts.  No matter what it is running, it was - to us - free.  All it cost us was about three hours of work.

Reason #343 why The Ranch is a magical place:  up here, things like this still happen.