Down And Up Again: A Grand Canyon Holiday - Down 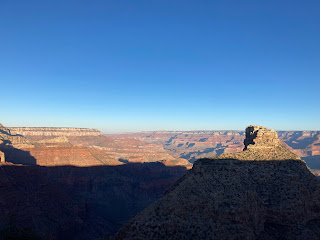 We depart the hotel at 0500 in two vehicles, a van with most of the party and a truck, which will be left near where we come out of the Canyon so we can easily get the vehicle. My brother-in-law and I take the truck, putting us with Storyteller.

I ask him how he got to doing this – I am always interested in people who seem to be living their dream. In his case, he grew up hiking and came to Flagstaff to hike and work. He started leading tours and worked as an electrician until he realized that if he wanted to just be a guide, now was the time. And so he went full time into guiding – this was his 25th trip into the Canyon in 2021, and he had just come out of the Canyon the day before.

I admire people that have the courage to live their dreams. 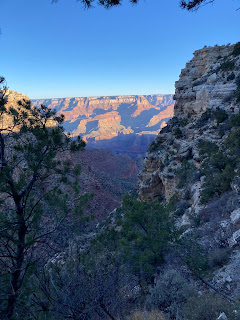 As we drive the 90 minutes to the Grand Canyon, the darkness which hides the pine forests gives way to the darkness of the desert as we enter the Navajo Nation. We start gaining elevation as we go up, past the semi-permanent tourist booths, until we catch sight of the edge of the Canyon.

After entering the park – there is no-one else behind us – we stop at the Desert View Watchtower for a bathroom break and a quick breakfast. This will be the last bathroom we see for four days. We drive on to the trail head, passing two small herds of doe Elk and their half-grown offspring. I had no idea there were elk here.

The trail head for the New Hance Trail is not a remarkable thing, a pullout to the side of road with no sign. It is done, the Commissioner tells us, to essentially keep away the unprepared. They go to drop off the van and the truck off, leaving us to patiently wait in the cool morning air.

They return. We shoulder up our packs, grab our hiking poles, and head out, the world – and the InterWeb – dropping off behind us as soon as we leave the rim.

From the top of the trail, the Canyon stretches out before us, looking all the world like it does from any of the view points. The Commissioner starts down, and we follow. 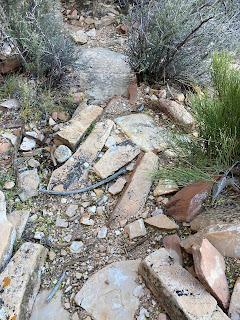 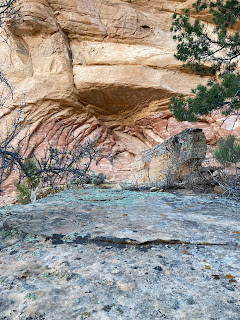 I quickly learn that the New Hance is not really a trail, but a route – the difference being that trails are maintained, while routes are not. The path itself is literally about two of my feet wide. One rapidly learns to spending most of one’s time looking down at the path and the place one’s neighbor has just been. The pack is an unconscious weight on my back. 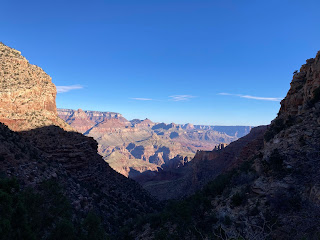 The down becomes steeper as we step along paths that two days previous I would have said were fit only for mountain goats. We are (I come to learn) traversing the side of the Canyon, slowly moving along a side of it. The walls are not steep, but looking to my left all one sees is down. I learn to lean towards the cliff to avoid overbalancing. 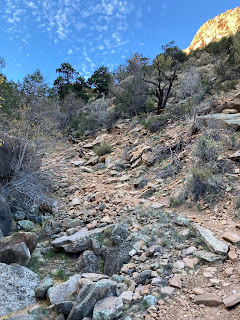 The world becomes a haze of walking looking down, stepping over and down. We stop to take water breaks and look around – Storyteller encourages us to do so from time to time, to remember why we are actually here. The Canyon continues to open up as we go down farther, the formation called Coronado rising to our right. 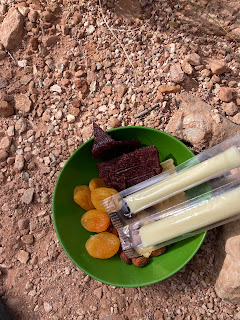 We stop for lunch, an affair of jerky, almonds, dried apricots, and string cheese. This is food I love anyway, so finding an excuse to eat it is delightful. We eat there, in the shadow of the Canyon, packs off and taking photos of the grandeur around us. 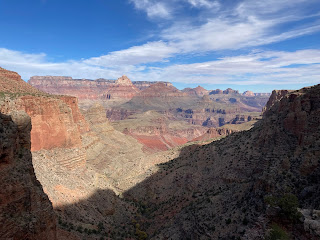 The rocks that were just bands at the top have begun to resolve themselves into layers: red, yellow, orange, green, pink, even purple. Coming from lands of deeper soils, I am hard pressed to think of a time I have seen rocks in such an array of color. Rocks are to the Grand Canyon what loam is to the Great Plains: Ever present, underlying everything. 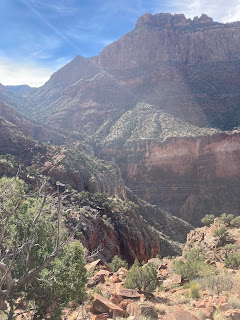 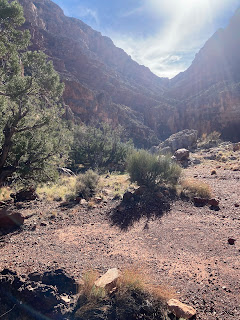 After lunch, we start the Red Wall Descent, so named as we are descending through a red layer of rock. This is another time of high attention, careful step and pole placement, and looking twice as one steps. At some point I suspect all of us go down on our butts. It is steep, but eventually it bottoms us out into Red Rock Canyon. 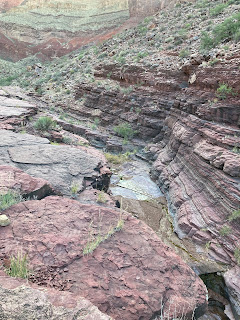 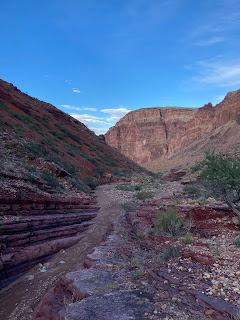 By the time we reach near the base of the Canyon, shadows are beginning to draw out. We have had an accident: one of the hikers has fallen and although there are no broken bones, it has definitely slowed them down. We will camp here in the Red Rock Canyon and make the Colorado River tomorrow morning.

The Commissioner and Storyteller have a routine in place: Storyteller goes down to the seep at the base of the campsite – the first water we have seen outside of our own supplies today – and begins the process of filling the filter bags, hanging them, and then filtering the water into recycled Arizona Iced Tea jugs. This will become a staple of our time making camp or resting anywhere there is water available. The Commissioner pulls out his cooking gear – a Jet Boil, a coffee pot, a small gas burner with a frying pan and pot and wrap around aluminum circle to retain the heat – and begins preparing dinner. These will be our sole cooking gear this trip. 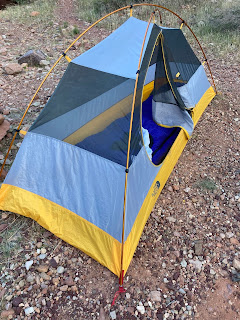 As they cook and prepare, we set up our campsites. The tent they have lent me is quite east to assemble and within 10 minutes I am assembled, pad down, and sleeping bag in place. The ability to drive stakes into the ground is non-extant as we are essentially on solid rock. After set up, we wander about a bit, looking at the red rock which gives this campsite is name.

My feet have developed to blisters, one on each heel. This is an odd place for them to develop. I wonder if it has to do with how I was placing my feet as I came downhill. 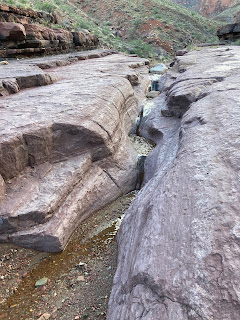 Dinner tonight is pasta with pesto and tomatoes. After dinner is served, we go around in a circle giving our “roses and thorns” – those things that we liked or went well, and those things that did not. For me, my number one rose is that I did not die. Everyone laughs when I say this. 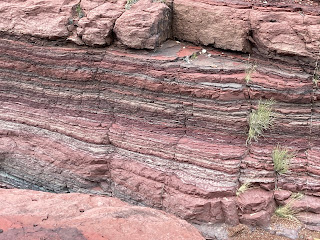 After dinner, we sit out and watch the stars a bit – stars that are so many as I have not seen in many years. We are exhausted as well and as there is no light except for headlamps, we are all in bed by 7 PM.

It is not a restful night. The wind howls through repeatedly, blowing my tent up and almost halfway over – were it not for my own weight, it would have gone farther. It takes out my brother-in-law’s tent, and I see his red headlamp trying to reassemble it. The wind does not go away but insists on remaining with us throughout the night. I am bowled over more than once. 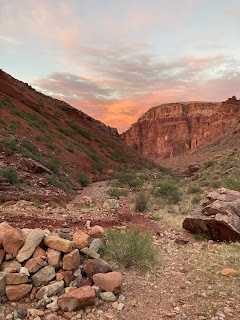 But looking up, the stars are glorious.