A Year Of Cryptocurrency

One year ago yesterday, I became "involved" in the world of Cryptocurrency.  I thought I should give  a report.

It was something I had been reading off and on about over the previous few months. I do not have the best head financially, and certainly not for anything that sounded so complex.  But then magically, I received an e-mail from Coinbase that offered me $5.00 in Bitcoin merely for setting up an account.

Free money. I will try that.

Over the intervening period, I have essentially taken short tutorials as new currencies were introduced.  I have no idea how a thing actually comes to "be" a currency (it seems to be as much willing it to be so as anything else), but they again offer you free currency for watching three minutes of videos.

Again, free money.  I will try that.

Unfortunately, it is a bit difficult to combine everything into a single picture the way I want, so I will start by listing the statistics:

- Additional money invested:  $41.00 (I put in money January through April and then stopped) 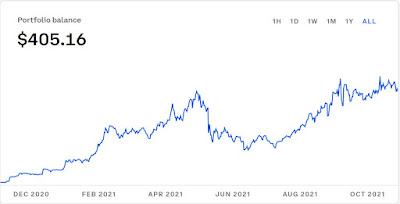 If you just do the simple raw numbers, that is a 90% return on my actual cash investment for a little time and just watching things happen.  After I did my initial investing, it went as low as $143 to as high as $469 for no discernable reason I can understand.

The one thing I did do with the money that I actually paid in was bought crypto that actually pay interest.  There are only a few of them.  As of this graph, I had earned $6.77 in interest (4.91% return).  That is not much, but I can almost guarantee you that is more than I earned in savings interest this year. 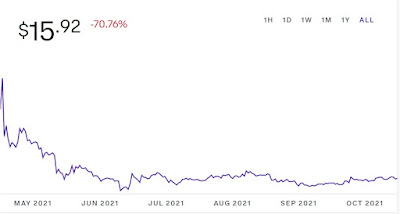 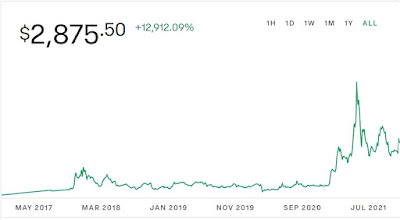 Once I earn them, I typical do nothing with them (after that first cash influx early last year).  I just sit an watch them increase and decrease in value for no discernable reason.

I still find the concept of a currency outside of a controlling agency very attractive.  But after a year of just learning and watching, I do not think things are there yet.

I will continue to "earn" and watch of course:  one fire, many irons.  But I have pretty low expectations that this will do a great deal more in its current state.  The system needs to move beyond high stakes risk taking to stability to be widely adapted.