Down And Up Again: A Grand Canyon Holiday - Prologue

In July, my brother-in-law and were talking when out of the blue, he asked if I would consider going on a hike in the Grand Canyon. 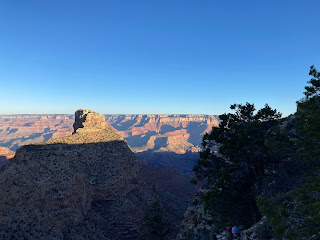 I had not seen the Grand Canyon in almost 40 years, when - as a newly minted teenager - we made the Grand Trek that many families do, stopping by as part of the long trip to or from family in other places.  I am sure that somewhere buried in a photo processing envelope somewhere in the house, there are my attempts to record it from the parking lot.

But that was about all the thought I had given it.  It was far away, and there were plenty of other things to see. 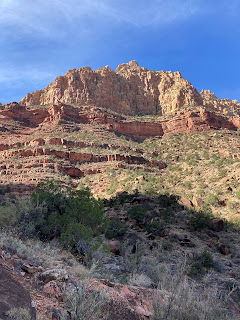 The company my brother in law was considering going with was one he had used for a previous hike and vouched for.  An attraction was that they could provide the equipment one would need:  backpack, sleeping bag, sleeping pad, tent. And, they would provide all food and cooking.  I just had to bring clothes and incidentals.

I had not really thought about hiking before in this light - and the Grand Canyon somehow sounded like a very long hike indeed:  4 days, 3 nights.

Somehow, I found myself saying "Yes". 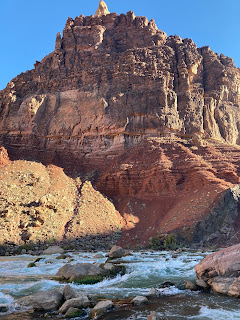 Hiking sounds a lot like needing to train.  So I called my trainer, The Berserker, and told him what I was planning.

"Get a weight vest" he said.  I felt confident, as I had just purchased one.

"Use the Stairmaster at the training center" he said.  I again felt confident, as I had started doing that as well.

"I will put something extra in your program" he said.  That, I felt not so comfortable about.

I do not know that the "extra" ever occurred - perhaps his program was brutal enough already.  And so I Stairmastered and trained and walked with my weight vest, trying to average one or two miles a day with Poppy the Brave, undoubtedly looking like a potential threat to my neighbors striding around in what conceivably could appear as a bullet proof vest in low light. 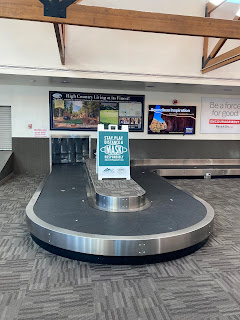 Flagstaff airport - our departure point - is a small airport, perhaps the smallest one I have been to in my life.  The Waiting Area may be as big as my house; the luggage carousel is something from a 1950's airport - and, no paid parking at the airport.  But the ride sharing services are there and sure enough, my brother-in-law and I arrived - early - for the day.  It is hard, of course, when you are in town for a day preparing for something which is at the back of your mind and out of the main part of town.  We ate, watched a movie, pulled things out of our suitcases - he his backpack, I my stuff.  We waited. 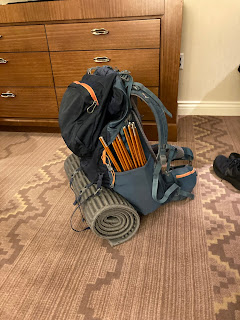 Prior to the meet up with the group, the main guide came by our room with my backpack.  Nice fellow, younger than me ( more and more are, these days), we went through what I was proposing to bring.  I had overpacked (not surprisingly I suppose; I always do. My fear of being cold overrules everything) and 10 minutes had us down to a more "minimalistic" load.  I started packing as we waited to meet our team. 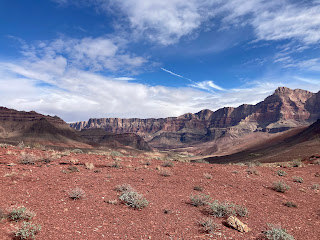 We met in the lobby of the hotel, that awkward sort of meeting that any group of strangers has prior to doing an activity that will effectively put them in close proximity for the next four days.  We were a mixed group: two older women in their sixties, hiking friends; a mother and her teenage son (he with a a broken wrist; they had decided on this trip during The Plague lockdown); a young woman in her late twenties who just liked the idea; a couple about my age on their first "empty nest" trip, our two guides (hereafter called by their trail names, The Coordinator and Storyteller), and my brother-in-law and I.  We had the basic introduction circle, followed by the plan of attack for the morning:  We would leave at 0500 and drive about 90 minutes to the trail head.

Dinner was in the hotel that night - a bit overpriced as it always is in such places, but the salad I had was good and the blueberry sour beer I had excellent and unexpected.  One last round of fiber before four days of who knew what kind of dietary experience.

If you were to ask me, that night, if I was concerned or scared, I would have told you no.  For better or worse, I had consciously not researched the trip.  I wanted to go into it with a clear mind and no preconceptions. 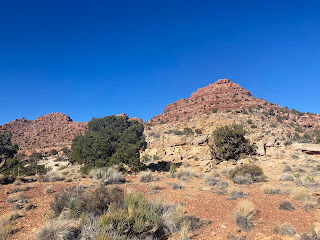 Other than it sounded like a lot of walking.