For Thanksgiving, we indulged in that once a year sin, Cool Whip on our pumpkin pie.  Tonight when I went to do dishes, I found this: 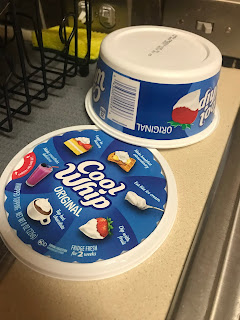 When I was growing up, this was our Tupperware.

I have vague memories of what we would now consider "actual" Tupperware - for our house, some square containers (which invariably I associate with applesauce storage and some actual real 1960's vintage Tupperware at my grandmother's house (picture light orange and blue bowls with clear lids).  But for the most part, we used these - or plastic bags (pre-Ziploc) for our lunch.  But for most of our short term food storage, this was it (or other recycled items - large margarine tubs were also well used).

This was back in the day when there were not cardboard inserts on the on the lids or cellophane wrappers around the outsides and so, over time, the writing became faded, in some cases fading to complete illegibility.  One "knew" it was a Cool Whip container by its shape and its faded blue images, not like some of the those "lesser" imitation whips.

Oddly enough, this really represented the first "recycling" that I can recall.  I suppose it was because my grandparents were quite frugal (having lived through The Great Depression) and the fact that growing up, we were probably what would be considered lower Middle Class.  But we faithfully reused those things until eventually they either broke or we finally graduated to "real Tupperware".

Today of course, we only speak of such things as items to be recycled, not reused. (Interestingly enough, I do think that in principle packaging is something we need to address.  That said, no-one wants "their" butter to be purchased in sticks or their toothpaste without boxes.  Always something else).  But once upon a time we had these things for free.  Why did we feel the need to "invent" additional plastic storage devices?