Of The Cost of Old Cars

During a recent discussion amidst friends, the statement was mentioned that someone had seen a 1970's Chevy Camaro in a parking lot for sale for about $15,000.  This branched out into an entirely separate discussion about the first car that everyone had driven, which had all been 1960s to 1970s models (which should be some indicator of our age).

Which got me to thinking - so off I went to the InterWeb to search for what I consider the classic car, the 1966 Ford Mustang: 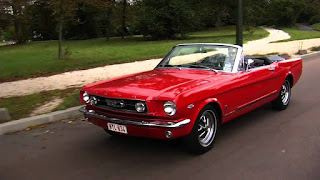 Turns out, you can get one of these beauties, moderately restored with a 289 or even a 302, starting at $19,000.  Now, that rather seems like a lot (to me) for a car, but when an average truck is starting around $30,000 with much less of a life span and not nearly the value or a commuter car around $15,000 which has no intrinsic desirability beyond getting you from one place to the other, suddenly this does not seem like such a bad deal.

It is a pipe dream, of course - a toy, perhaps even that mythical "Mid-Life Crisis" event I keep hearing about.  In reality, these things tend to sit in garages and are only driven on special occasions (they are talked about far more often).  In terms of use, it is no more and no less than any other automobile.

Call me a fool. Call me impractical.  Such a car brings back happy memories (two of my cars were straight six 1966 Mustangs, one red and one yellow).  And they are fun to drive and fun to look at in a way that an aerodynamic box is not.

Realistically of course, none of this will never happen.

But then again, you never know.
Posted by Toirdhealbheach Beucail at 4:00 AM