Whilst I was away this last month, The Ranch had snow.  Lots of snow - up to 13 inches, which for here is pretty much a blizzard. Of course power went out as it did across many areas here; based on where The Ranch is, they were without power for 13 days.  Conveniently, I showed up after the power was back on - that said, almost three weeks after the snow there is still a little bit in the shade. 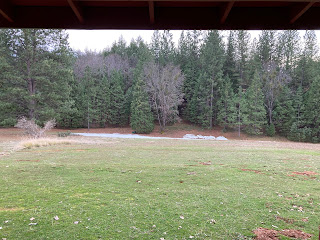 Apparently there were a few trees down on the road out but they all got cut/pulled off.  The trees around the house lost some limbs but fortunately no real damage. 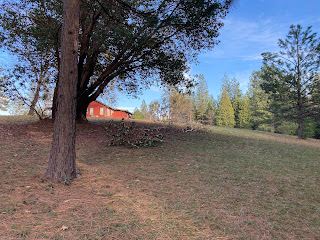 Note the widow maker pine tree in the top of the other tree. 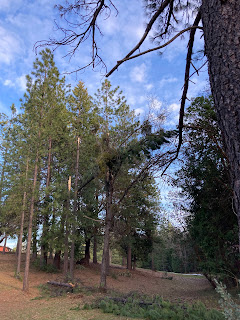 One of the oak trees in the Lower Meadow split and may have to come down: 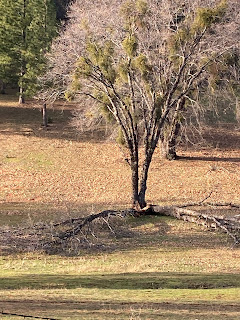 But the real shock was walking down the longer path past the Lower Meadow to the creek and back up to the main road (technically, our "official driveway".  Here, as there has been no traffic, the damage was much clearer. 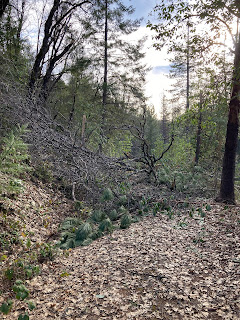 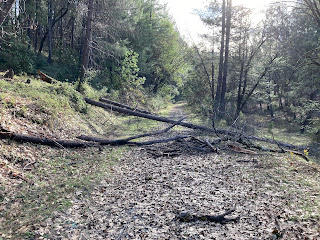 This oak tree split in three sections.  The reason for its fall is clear: heartwood rot. 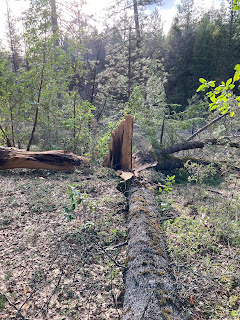 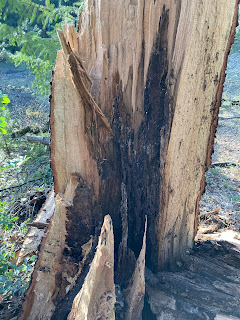 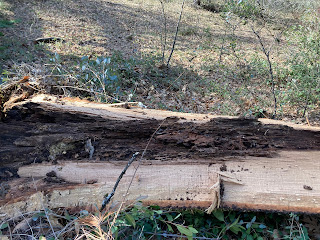 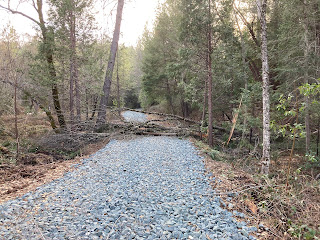 Not everything has fallen: 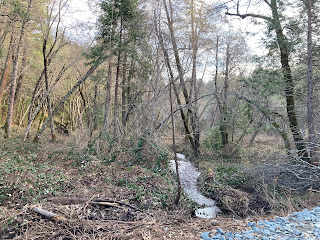 You may remember this shot from the creek, where I had the epiphany of two streams splitting and then meeting again: 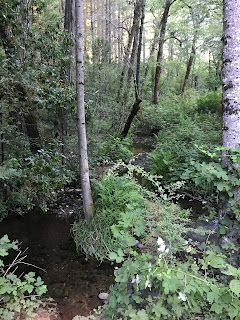 The split will be gone soon enough: 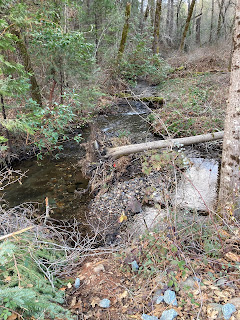 So many other trees leaning, ready to go: 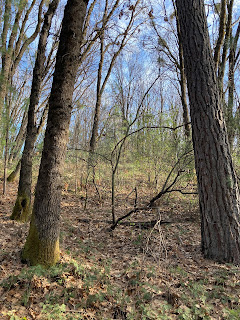 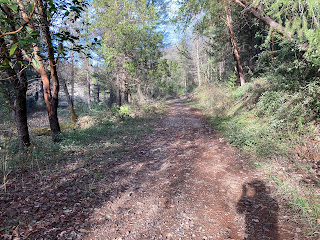 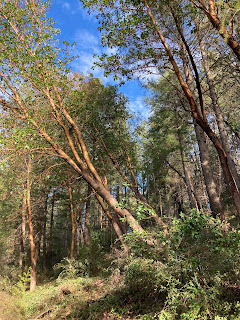 Being my father's son of course, my first reaction was "Look at how much firewood there is".  The actual disposition of this is somewhat in question, as the property the trees are on is not ours but the road is - that said, were we to start pulling the wood out, I doubt anyone would care especially now:  there are far more trees down in the area than can be used by any one person or group of people.
In a way, it is sad - not just for the fact the trees have fallen, but for what ultimately be the waste of so much good wood.
Were we a smart society and one based on the use of actual renewable resources instead of the ones we think are renewable, we would see many of the trees not been cut up and pushed to the side of the road to rot but turned into firewood (renewable heat) or salvaged as potential lumber in a thousand small mills for use in building.  There would be chipping and transport to spread over areas damaged by fire or used in gardens and animal pens.  Some would remain in the forest to break down slowly, recreating the cycle of life.  The more clever among us would be gassifying the wood or turning into other useful things.  But even with a rather unanticipated bounty, we would be putting the wood to good use instead of just leaving it to rot wholesale or thrust to the side, an inconvenience to be pushed away.
Thus the tragedy is magnified, not just in the destruction but in the waste.
Posted by Toirdhealbheach Beucail at 2:00 AM