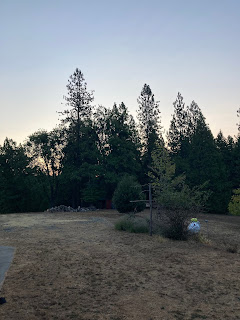 It still strikes me as completely remarkable how much silence is a part of whenever I come to The Ranch.

As I am sit writing this before 0700, there is virtually no sound inside.  Neither the heater nor the air conditioner are pressed into service, the temperature at this time of year being that of announcing that yes, Autumn has indeed arrived..  The refrigerator is silent, the relative moderation of the internal home temperature preserving the need for the compressor to operate and the ice machine, being off, having no impetus to drop in ice cubes over time.  Only the ticking of clock on the wall - battery powered, radio controlled - fills the room, competing at the moment with hum of my hard drive, and the quiet tip-tap of my fingers on the keyboard.

Occasionally the coffee pot, full of the hot canned coffee that is one of my treats when I am up here, pops.  I have no idea why it does this.

Daybreak has no sound of course, unless the lightening of the sky and the commentary of the birds and squirrels and the crunch crunch of deer heading back into the forest can be said to be its voice - but at best it is derivative only.  It is not as if the Sun actually sings on its way into sky, although our lives might be much more full if it did - for a moment I wish the old stories were true, and one could see the Chariot of The Sun and hear the horses as they drove across the sky.

The silence is deafening in at least one sense, of course; a year ago it would not have been this way.

From where I write on the couch, my mother would have been perched, either re-reading one of her cat anthologies for what might have been the fifteenth time (if it was, the plot always remained a surprise to her) or napping with her hands crossed on her lap while my father watched the flickering light of the television with whatever sporting event could be found at this time of the morning (soccer, usually) or perhaps sat in his chair next to the fire, playing solitaire or looking at pictures on the tablet (or, perhaps, reading this very blog).  Undoubtedly, even in early October, the fireplace would have a fire in it (my father was forever cold).  I would float by, wave good morning, and go to start the coffee pot (my father would take a cup, but never made it when I was not there; my mother was always a tea drinker).

The refrigerator clicks on, its hum drowning out everything else but the clock keeping its patient schedule.

The silence is not oppressive, nor does it seem to be laden with the sorts of things that would make for regret or sadness.  It simply seems to exist, an entity unto itself.  Every day I am not here, the silence will be the same at this point, except that the coffee pot will not pop and my computer will not add to the quiet symphony of what has become the daily routine of a house that has nothing but the quiet sounds of modernity and memory living in it.

The rains will be here soon enough, and the sound of the birds and squirrels will be replaced with the sound of the rain falling.  The crunch of brush and grasses will change to slithering noises and the leaves and blades green up and become fat for the deer, who never seem to make noise when the eat.

The silence, it seems, always wins.