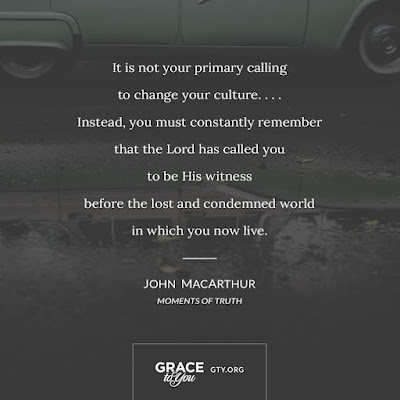 I respect MacArthur's biblical scholarship - it really is first class, and arguably he would (along with the late R.C. Sproul) would be my standard against which I would measure late 20th Century pastoral teaching (his knowledge of New Testament Greek sets him far above most others) - even as I sometimes deplore his lack of tact.

But that said, this statement struck me as powerful, especially given yesterday's post and frame of mind.

To be clear (and I have followed MacArthur for over 20 years), he is very consistent on this point.  He has not been one to discuss or monitor national or international trends of social or political import.  He has always brought the conversation around to the Church as witness in a dead and dying world.

It seems such a different message now from some much of what passes for church, does it not?  But I think MacArthur would say (of course, I am not speaking for him) that all of that can come from a people that are redeemed.  Otherwise, one is merely continuing to make repairs on a structure that is continuing to fall apart - and people can do all the "right" things in life and still be condemned in the afterlife.

The other thing that strikes me is the phrase "the lost and condemned world in which you live".  Not a phrase one hears at all any more.  The world systems are just flawed and can be repaired, not lost and condemned.

Be the light that cannot be hidden under the basket, understanding that as a light our primary job is not to  make the house better or cleaner but rather to show the fact that it is falling apart, and that there is a ultimately a way to make it better.  But it will require something more than minor fixes.