This weekend I pulled out most of the Summer Garden.  This is the last view: 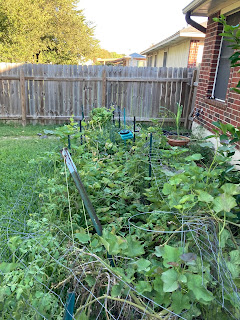 As you might remember from here, here, and here, a big difference this year was the use of ollas, stoppered clay pots in the ground that act as a slow release watering system (again, hat tip to Leigh at Five Acres and A Dream for introducing them to me).  Other notes to be included this year is we had an exceptionally wet Spring and somewhat wet Summer (for us, anyway).
So how did it go?
1)  The ollas actually worked very well overall. I would say especially in the early part of the growing season, the ollas helped to sustain the seedlings in a way that just watering did not.
2) There were some issues I found in inconsistent plugging of the holes in the bottom.  Some went days without needed a refill, some went less than a day.  From what Leigh said, she and Dan seal the bottom with a thin layer of concrete.  That might make a lot of sense and is something I will have to fix.
3) A lot of what you see there is sweet potato vines.  I need to find a better way to trellis/manage these as doing a later planting was impossible for anything.
4)  While the ollas were useful as a sustaining water source, things really did do better with a 10-12 minute daily soaking.  As you can see from the picture above, I "engineered" a solution, but will need to think about something a little more elegant.
5)  Yield?  Six Tomatoes (I never have gotten that many tomatoes in 12 years of living here), three corn ears (again, a victory of sorts - although this was before I started daily watering.  I think I could have done better with it), a reasonably good yield of Black Eyed peas (and miserable yields of all other beans - I do not know why I bother anymore.  And the sweet potatoes below, of course: 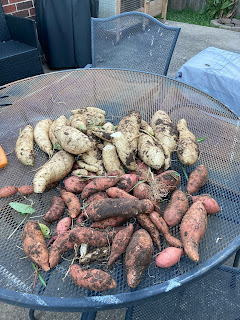 Next year one thing I will need to change is to just go to warm weather vegetables all the way in.  Also, trellising and shading would delightful pluses.

One of the reasons the garden was pulled out this weekend was a suggestion by Leigh to back calculate 10 hours of sun to determine planting.  Although we do get a lot of sun here all year, this was the most reasonable time.  So I will start replanting this week for Autumn.

Overall I was quite pleased with this Summer's outcome.  This is in a lot of ways the most successful garden I have grown.  I think with some tweaks I can do even better.

Email ThisBlogThis!Share to TwitterShare to FacebookShare to Pinterest
Labels: Gardening