That I recall, I first became acquainted with Leigh Tate and her blog 5 Acres & A Dream on 27 July 2018 through a link with the title "Six Months Later:  How Dan's Hand is Doing" - because with a lead like that, who would not want to look?  Since that time, I have become an avid follower of Leigh and her husband Dan (who in his ability to craft things, I am convinced, is a cross between Prometheus and Bob The Builder) who have been practicing sustainability and self reliance somewhere deep within the Appalachian mountains (which really does sound so much mysterious and cool than an actual state name).

Leigh is a prolific blogger and freely shares their experiences (good and bad) as well as helpful tips (for example, I never knew what a rose hip was until this week) as they continue on their journey for living the life they desire on Five Acres.  So when Leigh announced she was writing a sequel to the original book 5 Acres & A Dream, I was all in. 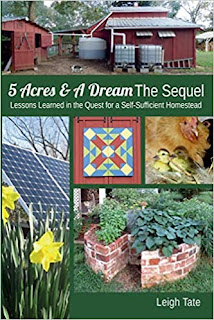 The book, you will note,  is a sequel to the original.  This alone makes it unusual - most agricultural books (and I have more than a few) are usually one book only, telling you how do something, not necessarily how it went for them.  A few - Gene Logsdon or Joel Salatin - are happy to share and some - like Masanobu Fukuoka - share in a philosophical way that makes me think I might understand how they did, but it is rare.  In this case, we get to look seven years later into their journey and see how things are going.

The book starts with a review of the original concept ("The Dream") and how they reassessed their goals, priorities, and master plan.  She then reviews different areas of self sufficiency:  food for themselves and animals, energy, water, resources.  She covers the realistic factors of disappointments and distractions, and then rounds out with how she sees things moving forward.  It ends with recipes (and who does not love recipes) and helpful appendices, including a book list (I always consider it a good thing when authors I respect and my bookshelf have the same volumes).

To be clear, this is not necessarily meant as an instruction manual.  In a few places there is a more extensive review of the projects (Glen, if you were to read this book I would welcome your review of a small solar set up to support a refrigerator and freezer.  I think it is solar power done appropriately) but it is more often a review of how things worked, what did not, and what they would or did improve on over time.  In that sense it is more of a review of the overall plan and how (like any good plan) people adapt.

It is also a book with great and thought provoking quotes (from Leigh's other writing, how could it be any other way?).  I include a few of my favorites below:

"The more we interact with the natural world around us - physically, mentally, emotionally, and spiritually - the more we understand ourselves to be a part of it.  Our life's work is to conduct ourselves in such a way that our five acres of earth can be its best self.  And that begs the question of how.  How do we function as part of our homestead ecosystem?"

"There is something profoundly satisfying in working towards a less complicated, less wasteful, and environmentally  responsible lifestyle."

"We don't fully appreciate that the lifestyle we're accustomed to is only possible because of an abundant and easily available energy supply.  To achieve success in a lifestyle transition, we have to learn how to change."

"Discouraging things are a part of life.  While we may not control our circumstances, we can control our attitude towards them.  I can choose to be grumpy or I can choose to be grateful.  It all depends on what I think about; on where I put my mental focus.  I'm not sure who said "just do the next thing,", but it's excellent advice.  Step by step, day by day, season by season, we just do the best we can.  And when we look back, we see that we've come farther than we thought."

As I stated before, this book is one of the rare ones in that it reviews progress on a goal.  Leigh freely shares their maps of their overall plan and how that has changed.  She shares how they make decisions on which projects to do (this has even entered into my dim consciousness; I am making lists as well).  And she is remarkably honest about the fact that this change towards this dream of simplicity and sustainability was not just with their property, but with themselves as well.

So, yes, if you were wondering, I do recommend this book.  Do me a favor and get it from Amazon or one of the other places that are selling it new so Leigh gets the money.

After all, we will need a sequel to the sequel!