As I was driving to church this past Sunday we passed one of our local varmints on the side of the road. He was dead, flat on his back with his four little legs up in the air. Driving by, it reminded about the wildlife that lives in our greater suburban area – rabbits, deer, skunks, opossums - and how, of course thye is getting slowly pushed out by the ongoing development literally jumping up right before our eyes. Building, building, building – slowly destroying the fauna and flora in it leaving naught but green spaces and parks as reminders of what used to be.

And suddenly it hit me: the city is a desert.

Oh, not in the way we have typically been trained to think of a desert: searing heat, scrub vegetation, devoid of water, inhabited by strangely adapted animals with large ears and burrowing feet. But desert nonetheless, in the sense that it is devoid of the life that inhabits the more temperate climates with nothing but isolated outposts of oases named “parks” and “green spaces” to sustain it.

I have stood on Market Street in San Francisco as the opening of dawn. There is nothing there but concrete and buildings and perhaps the odd pigeon. The papers abandoned from yesterday blow down the street from a cold wind coming off the Bay. In the early morning light it is empty, peopled only by the occasional commuter hurrying to an early start and those who make their life on the streets. It is essentially devoid of life. And even later in the day when the street and squares packed it only has the illusion of life: nothing “lives” there, instead merely moving through the landscape to reach somewhere else.

It is environmental degradation and depredation of the highest order. Yet strangely, so many that seem to dwell in these deserts hardly see them as such. Oftentimes their environmental concerns are all focused outward without recognizing the barren wasteland within which they dwell.

What if, in addition to demanding the protection of the environment that exists “out there”, they took the same sort of interest where they live? Certainly they have concerns about their water and air; what about the lifeless conditions in which they live? Putting up a few trees or helping squirrels dash across the road is hardly the thing; what about the radical notion of tearing down blocks and high rises and restoring fields and forests?

This is a picture of what San Francisco looked like in 1846  Why is this not the goal of the city dwellers along with their other goals of the environment? 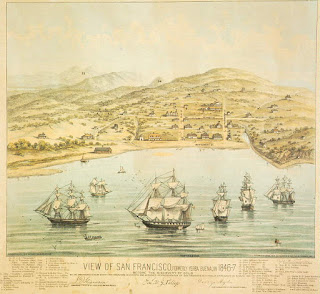 Desertification is rightly seen as an environmental challenge that harms. But what about the desertification of life in our great metropolises that we have brought upon ourselves?
Posted by Toirdhealbheach Beucail at 4:00 AM