A Life You Do Not Have To Retire From 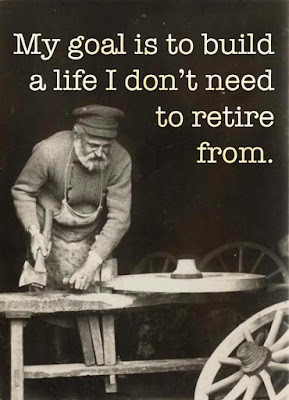 I think I know most of my readers to know that this is goal we are working towards (or have achieved, in some cases).

It cuts across the grain of most Western - or at least maybe American - thoughts of retirement.  To most, retirement means the ending of something you have to do and moving on to the things you want to do. Which, if someone really sat down and thought about it, would seem to be rather backwards - after all, one invests almost half of their life working towards the point of being able to spend the last quarter of their life (if they are lucky)  doing what they "love", perhaps only to find out that doing what you "love" is not really doing what you want at all.

How much better to work your way into a life that you enjoy every day, not just in the latter parts of it.  To be engaged both early and late in the same sorts of things, to find that your life has become one long labor of love instead of a series of chopped up movements, hermetically sealed from each other in ways that the past cannot inform the present or the future.

For most (me included) it remains more of a dream to be realized that a reality to be lived.  Because be clear:  to do this means to sacrifice at some level.  It means staying true to yourself rather than being bewitched by that which society and civilization tells you are the appropriate paths to take.  Sometimes it probably means working harder and longer than anyone else and being willing to live in ways that the most could not imagine to get the ultimate results that most only dream of.

And to those who are not there yet, it means fighting.  Every day.  Fighting against the mind-numbing, spirit-sapping call of consumerism and mediocrity, of the concept of being taken care of rather than taking care of one's self.  To save where others spend, to make do where others buy, to go without when others cannot live without.

Ultimately, to live such a live is to reclaim freedom - freedom from "wants", freedom from dependency (and not just material - those that have such a life often seem just as free from psychological dependence on others), freedom from the concept of life as we have come be told "it is" in modern Western Society.  It is, some ways, the ultimate act of individualism in a culture that has come to demand the embrace of the consumer, riches driven society in which we currently live.

"Only a few prefer liberty - the majority seek nothing more than fair masters" Gaius Sallustius Crispus (Sallust), The Histories
Posted by Toirdhealbheach Beucail at 4:00 AM