The Ripples Of A State Falling

Long ago, in the youth of my middle school and High School,  I first learned names like Kabul and Jalalabad.

There were pictures on the television (only the Big Three in Those days) of Soviet Soldiers pushing their way into a land of mountains and snow, of raggedly dressed rebels with minimal weapons first trying to stave an invasion and then fighting back.

We started to learn new words and phrases:  Muhajideen, Stingers, Hind helicopters, Boycott the Olympics.  The nightly news became filled with pictures of Soviet Helicopters going down, of tanks rolling in - and then rolling out, as the Soviet Union left to what turned out to be last step in their travel into the dustbin of History.

Over the next years, we began to learn new words:  The Taliban, and Wahhabism, The Northern Alliance, The Lion of The North.  This was a world that was dimly going on in the background of the fall of the Soviet Union and a country consumed by its own internal issues.

And then, following 11 September 2001, we had to relearn the words all over again with new ones:  Azeri, Kandahar, Mazar-I-Sharif, The Mantle of The Prophet, Tora Bora, Bagram.

The War on Terror became the equivalent of the War in Vietnam:  A conflict that continued year after year, which retreated further and further into the consciousness of the average American - unless one had a loved one or acquaintance that went to Afghanistan, then prayers and thoughts were offered.  The news - now many channels, not just Three - would list the names of the dead and describe injuries.  It became just another background conflict to compete with all the other low intensity conflicts, often exceeded in the later years by the death count in the US itself.

And now, in the last 96 hours, we have had to relearn all of these words all over again.

As I write this, the Taliban are now reported as being in Kabul and opening fire on the airport, which now remains the single route of escape.  The country has fallen in an unbelievably quick fashion - in words that will inevitably go down in history, the timeline shrank from "6 months" to "90 days" to "this week" in the matter of less than a month.  In a way, this should surprise no-one: when the US decided to effectively leave in the dead of the night without informing even their counterparts in the Afghan military, it was plain to see that there was really only one future in the country if one could not get out.

There are arguments - and good ones, I think - that this happening as quickly as it did bespeaks an intelligence operation that went on far beneath the surface where Western Intelligence was working.  One would think - and hope - that such a failure would be brought forward and discussed in public, as would what appears to be wild military overestimations as the strength and capacity of both the Afghan National Army as well as the Taliban, as well as why millions of dollars of equipment was left essentially ready and available for the new conquerors.

The enduring image of the last two decades in Afghanistan for this  and all indeed generations, and will be the picture of the helicopter leaving the US Embassy: 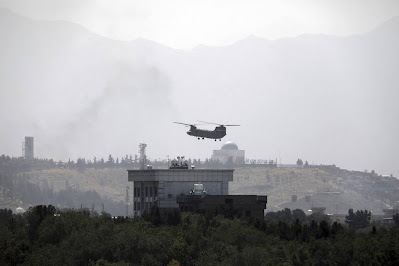 Based on the past, the future is not terribly hopeful for those that remain.  The Taliban call in public for calm and people staying in place, that property will be respected and rights upheld.  Based on past history, this at best remains to be seen and at worst, a banal lie to allow more assets to be deployed prior to the stories of 1996-2001.

As a student of history, there will be outcomes of this event.  There always are, when a dominant world power is repulsed:

- The decision making process that arrived at this point makes the US look, frankly, like a country that is ill informed and unserious.  Our allies will rightly take stock of us and our commitment to them.  Our enemies will re-calculate their estimates of our commitment and our strength - not the commitment and strength of our words and Social Media posts, but of our actual abilities.

-  Western Values and Western concepts will be re-questioned by a great many other non-Western countries, as they likely should.  Western values did not, in the end,  help the people of Afghanistan in their need.

- Approximately $2.2 trillion dollars were spent in Afghanistan, for which there is no ability to collect.  The money is gone.  In a country already having significant disagreements about the speed of the growth of their debt, not whether debt is beneficial (the real question), there will another round of arguments and finger pointing.

- Whether or not this defeat is a significant one, the modern world and its media will make it not only apparent but larger than life.  We had black and white and color pictures and movies in Vietnam; we will have streaming video in Afghanistan.  We warn our children to be careful what they post on-line; it is equally as true for states.

- Whether or not the US is  actually weak, it now appears weak.  And weakness in a world measured by strength and power is always attacked, even if not successful.  Old and sick antelopes are brought down by the lions for a reason.

- The US will go through a crisis of conscience.  Hearings over all of this will be called for, likely with few if any changes.  The question of America as a concept will be questioned.  Those in power on both sides of the political aisle will attempt to find ways to demonstrate internally what they cannot demonstrate externally, that America is still "strong" - and by strong I mean able to enforce their will, on their own citizens if no-one else.

I have prayed - and will continue to pray - for the people of Afghanistan and our own veterans and families who will bear the scars of all of this for the rest of their lives.

To quote a somewhat old phrase, the lamps are going out, all over the world.  We will not see them lit again in our lifetimes.